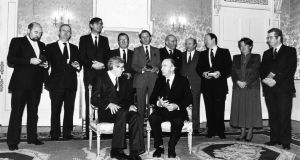 The cabinet in 1986: In the front row are the taoiseach, Dr Garret FitzGerald, with the president, Patrick Hillery. Photograph: Paddy Whelan

The Defence Forces drafted plans to invade Northern Ireland in 1986 in the event of the Anglo-Irish Agreement failing and the British pulling out, newly-declassified records reveal.

In a memorandum on Northern Ireland signed by then director of operations Col Stephen Murphy in April 1986 and marked “secret”, the Defence Forces considered the possibility of taking military action if the deal negotiated by UK prime minister Margaret Thatcher and taoiseach Garret FitzGerald fell through.

It envisaged that the collapse of the agreement coupled with a British withdrawal would create an “irresistible pressure for intervention” by the Republic in the territory, especially if there were to be a “major onslaught” on nationalist communities in a future loyalist state.

Records released under the 30-year rule show that options considered by the Defence Forces were such a set of circumstances to prevail, included “an offensive mission to destroy the UDR (Ulster Defence Regiment), RUC (Royal Ulster Constabulary) and loyalist armed elements” and an air and sea assault on Belfast.

It states that the destruction of the security elements of a Northern Irish state would require a force of a “minimum six or seven well-equipped and supported brigades”, which would necessarily require the mobilisation of more than 10,000 troops, as “without such a force it could not be considered”. 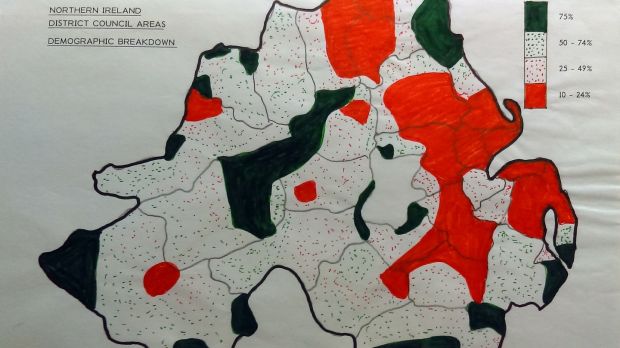 It estimated that such a state would probably be able to muster nine UDR infantry battalions, along with two battalions of army reservists left in Northern Ireland, a cavalry squadron and an air defence regiment.

“It is assumed that loyalist paramilitaries will assist the forces of the loyalist state,” it was added in the eight-page document.

The memorandum also teases out alternative tactics including a more limited mission “to protect various nationalist population centres”, and a “terrain-holding” mission to facilitate the movement of refugees to the south.

It describes nationalist communities in Derry, Fermanagh, Tyrone and south Armagh as having “open lines of communication with the Border”, although the situation of nationalist enclaves in northeast Antrim was regarded as being more problematic.

Contemplating the obstacle of the “overwhelmingly loyalist areas of north Armagh and north Down”, the plans mention a “direct thrust” by at least two Defence Forces brigades starting from Dundalk or Monaghan thereby creating a corridor to the nationalist population centre of west Belfast.

Alternatively, the combination of an “air assault/transport” to airports at Aldergrove or Sydenham and a “sea assault/transport to Belfast Harbour” were regarded as having an element of surprise, but the “lack of troop carrying helicopters would be seriously felt” in such a scenario.

The memorandum states that the Defence Forces “have a capability for intervention to achieve certain objectives” in regards to Northern Ireland.

However, at its August 1985 meeting, the Council of Defence – which included minister for defence Patrick Cooney and the secretary of the department as well as the chief of staff, adjutant general and quartermaster general of the Defence Forces – voted unanimously against any possible intervention in Northern Ireland.

In doing so it suggested that the Defence Forces’ “numerical strength and equipment are hopelessly inadequate”, although the formulation of invasion plans as a contingency measure was nonetheless pursued as a direct consequence of the council’s discussions on the topic.