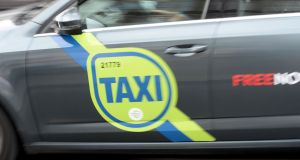 Parked at the end of a long queue of taxis that spill over into the adjacent lane near St Stephen’s Green, taxi driver Adidemi Lugboso (51) says there is one glaring problem he faces as a cab driver in the city.

“There’s too many taxis,” he says. “There’s as many taxis here as New York.”

Several taxi drivers who spoke to The Irish Times said the number of cabs on the street can be overwhelming and oversight was not enough to regulate unlicensed drivers.

“Nobody’s listening,” says David Heavey (57), waiting for a fare outside Dublin Castle. “If you report someone you never hear back.”

“It just goes flying around in the cloud,” agreed Sean (53), who declined to give his last name. “Nobody ever acts on it. The punishment doesn’t fit the crime.”

Waiting in line outside the Westbury Hotel on Grafton Street, he says he couldn’t remember the last time the enforcement team came to him to check on his details.

He maintains that customers focus too much on Friday and Saturday night when taxis are in high demand, but don’t care about the rest of the time when the streets are flooded with cabs.

“Where are you on Monday, Tuesday, Wednesday and Thursday, you know?” he says.

The DriverCheck app allows users to enter the number located on the side of the taxi and compare the photo and name to the person driving the car. If no information comes up, the driver is probably not licensed. The problem, according to the drivers, is there is little enforcement.

Pulling on a cigarette next to his taxi parked in the line along the quays, Seán Nolan (44) agrees with the claim of a lack of oversight and response to illegal taxi drivers.

“We can’t complain,” he says. “If we find a taxi on the rank that is illegitimate, or not on the driver check, we can’t report them. It has to be a customer [who reports them]. What use is that because not all customers will check the system to see if that driver is legit.”

Nolan, like many other drivers, does not see the introduction of Uber as contributing to their problems. Unlike in many other countries, Uber drivers in Ireland must be licensed in the same way as taxi drivers.