Suicides of young women ‘must give concern’, mourners told 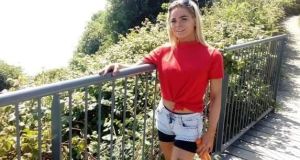 Her sister Adriana, addressing a packed St Matthew’s Church in Cherry Orchard, said her family would “always feel cheated” that Zoe had been taken so young and urged people to speak to someone when they were in darkness.

“Suicide is not the answer for anyone, for any family, or any person,” she said.

This was the third funeral of a young woman who has died by suicide in Ballyfermot in the past fortnight, and the fifth in the last two months, according to local community workers. Three of these were mothers of young children and all were in their 20s.

In May 2018 The Irish Times reported women in some of the poorest parts of Dublin were taking their lives in the same numbers as men. There had been 37 deaths by suicide in 2017 in the Dublin south-central area, half of these of women in their 20s and 30s and most with primary-school children.

Local TD Sinn Féin Aengus Ó Snodaigh said on Friday the suicide rate was approaching “near epidemic proportions”. He called for an emergency multi-disciplinary task-force on mental health and suicide for Ballyfermot.

Ms Flynn, who lost a baby son Blake two years ago, died on July 5th and is survived by her mother Pauline, grandfather John, and five siblings.

Celebrant Fr Joe McDonald said: “We have lost a number of young people tragically over the past few months... It must give concern and raise questions for us”.

Describing himself as “very reluctant to step into that sacred space” of a family grieving someone who has died by suicide, he said the Church had been “very poor” on the issue.

“Nobody here knows the answers to the questions. Zoe herself had more questions than answers. I don’t want to overstate religion today.

“I am conscious to try to send that message, to talk to someone. If you are here in this church today and you are, or you know someone who is, vulnerable and fragile...there is no stigma in that. Life gets in on us and the darkness builds up and frightens us.

“We are not always how we look. There is no doubt that Zoe was beautiful and brilliant and gifted, but it is about how we are feeling inside. We have become a very noisy world, a very busy world, a world very caught up in technology and sometimes we cry out for someone just to hear us, just to listen.”

A HSE spokeswoman said there were a range of mental health supports at community and individual levels in the south-central Dublin area. While there were 37 deaths by suspected suicide there in 2017, this fell to 16 last year.