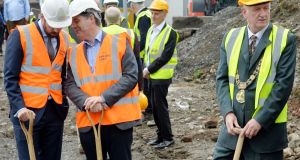 The unprepossessing north inner city pub, The Ref on Ballybough Road, is the unlikely registered office for a number of companies with which the Dublin Lord Mayor, Nial Ring, has been associated with over the years.

The building, which is owned by Mr Ring and his sometimes business partner, Liam McGrattan, plays host, on the floor over the bar, to a publicly listed company called IMC Exploration Group plc.

Founded in 2011, the company is involved in looking for gold and other metals in three sites, in Wicklow, Wexford and Clare. Its shares trade on the NEX exchange in London, which describes itself as an exchange for “growth companies”.

The IMC shares trade for as low as 1p, but sometimes spike to double that. The nominal value of all its issued shares (its share capital) is currently £2.8 million (€3.2m).

As it has no trading income, having not as yet made any great discoveries, it supports itself by raising funds from investors willing to take a punt.

At the end of December last, IMC had accumulated losses of £3.43 million, but was still in business. During the year to October 2018, it sold new shares to the market on four occasions, raising a total of £520,000 to fund its ongoing operations.

Both Mr McGrattan and Mr Ring resigned from the IMC board in May of last year. According to its latest filed accounts, Mr Ring owned 5.13 per cent of the company in November 2018.

Similar dealings occurred between the company and Mr McGrattan, as they did with other connected parties also.

So while IMC has never struck gold, and never made a profit, it has raised a lot of money over the years, and continues to do so.

A similar situation used to apply with Proventus Renewables plc, which had its registered office over the pub and traded its shares on the Danish GXG exchange, which has since closed.

At one stage Proventus was looking to make money from wind energy in Bulgaria, but before that it had a different name, Captive Audience Display Solutions plc (Cads), and was focused on trying to sell advertising in Irish petrol forecourts.

Mr McGrattan and Mr Ring were involved in Proventus at board level and were also major shareholders. The share price rose and fell over the years, and the company never produced a profit.

Another Dublin company with which the Lord Mayor and Mr McGrattan have been involved is called US Oil & Gas, which is in the business of looking for oil in Nevada.

Incorporated in June 2009, its shares were traded on the London Plus market from 2010. The shares sold for as low as 7p each and for as high as 97p. Trading was suspended by Plus in October 2011, with the operators citing a “disorderly market”.

The shares were delisted in April 2012, and immediately listed on the Danish-regulated GXG. They rose in value to almost £7 during 2012. The Plus market has since closed. Mr Ring and Mr McGrattan resigned from the company’s board back in 2010.

US Oil & Gas has its registered office in Ballsbridge and is still active, but its shares are not publicly traded.

Mr McGrattan and Mr Ring were also involved (as executive chairman and finance director respectively) with a company called Teknomining plc, which launched its shares on the Plus market in 2010 with a view to funding mining exploration in Turkey. The company raised £568,093. The share price went from as low as 13p to as high as £2.42.

Teknomining had exploration licences in Turkey. In 2012, Mr Ring and Mr McGrattan stepped down from the board and a new board began a review of the company’s affairs. In April 2013 it was announced to the market that the company had yet to fulfil an agreement with the local landowner in Turkey, and that, failing its completion, “the landowner will not allow access to his property, which is the company’s main target for copper and nickel”.

The day after the announcement was released, trading in the company’s shares was suspended at the board’s request. Subsequently, Mr Ring and Mr McGrattan threatened to sue the directors for defamation. The directors said they would contest any proceedings. No such proceedings were ever brought to hearing.

There is nothing unsuccessful about any company I was involved with”

In 2014, Mr Ring told The Irish Times that all announcements made by Teknomining during his time on the board had been approved by the company’s corporate adviser and that he had no difficulty standing over every one. He said he was confident the company’s fortunes would improve. Teknomining was dissolved in 2015.

Mr Ring also told The Irish Times that he had made a “reasonable profit” from trading in the shares of Proventus, US Oil & Gas, and IMC, which at that stage (2014) had between them racked up losses of about £7 million.

An accountant, he contested the idea of criticising companies that were involved in exploration on the basis of their not producing annual profits. People did not talk about larger exploration companies, such as Providence Resources plc, in that way.

“It’s not like running a corner shop, where you put your money in and get an immediate return.

“We are all big boys. We evaluate the management teams and the projects and we put the money in.”

During the pre-crash era Mr Ring was also involved in property development, and was a partner in a number of ventures with Jerry Beades, the businessman who was, at one stage, on the national executive of Fianna Fáil, and who has in more recent times featured as a prominent lay litigant in the courts.

A friend of the former taoiseach, Bertie Ahern, for 10 years up to 2008, Mr Ring was a member of the board of IDA Ireland.

Despite his long-time association with Fianna Fáil, Mr Ring put himself forward as an independent when he first successfully sought a seat on Dublin City Council in 2009.

In 2013, a short video was uploaded on YouTube showing the staff in the Shelbourne Hotel lining up and clapping Mr McGrattan as he walked towards the hotel’s revolving door.

“The Shelbourne Hotel’s long-term resident Liam McGrattan leaving after two years’ stay,” is the title on the video, in which Mr McGrattan is the subject of a short address by the manager. Mr McGrattan had been living at the St Stephen’s Green hotel while his Clontarf home was being rebuilt, including a swimming pool put in the back garden, according to the Dublin City planning files. Asked about this, Mr McGrattan said it was a private matter.

Mr McGrattan disputed the suggestion that any of the resource companies he had been involved with had not been successful. The shareholders in Cads had been paid shares in US Oil & Gas worth Stg£21 million, he said. “Do you call that unsuccessful? There is nothing unsuccessful about any company I was involved with.”

Court records show that Mr Ring has been the defendant in 16 sets of High Court proceedings since 2004, of which nine were taken by banks.

One set of proceedings was taken by the Revenue in 2013 and was settled by agreement the following year. Mr Ring told The Irish Times this week that the case involved capital gains tax, but would not say how the debt arose or how much was involved.

The courts issued a possession order to the Bank of Ireland in May 2017, in relation to his Clontarf home, because of a failure to make mortgage repayments. A stay was put on the order and Mr Ring said he would sell assets in order to settle the debt. Counsel for the then councillor told the court that Mr Ring had found a new job as consultant to a mine-drilling company in which US companies had a takeover interest.

Although the stay on the possession order involved a requirement that the Rings pay the bank €10,000 a month, no such payment was made.

In February the possession order was struck out after the judge was told that Mr Ring and his wife, Joyce, had paid €1 million to the bank to settle the debt and legal fees. The court was told the source of the funds could not be disclosed for “data protection reasons”.

Earlier this week Mr Ring told The Irish Times that he would be “happy” to discuss the source of the funds but that his wife doesn’t want to. “There’s plenty of lenders out there,” he said, but would not elaborate.

Documents in the Registry of Deeds show that the Bank of Ireland registered a mortgage against the house in 2005.

They also show that a judgment order from the High Court, dated May 2015, was registered against the property on behalf of Bank of Scotland in July 2018.

A judgment order for €468,249 was registered against the Rings in favour of Investec Bank, in March of 2017. Mr Ring was later asked a series of questions about these matters, but has not responded.

The records also show that a judgment order on behalf of Ulster Bank for €129,318 was registered against him in September 2012. Both debts remain outstanding, the records indicate. A request for a comment about these judgments met with no response.

Mr Ring was voted Lord Mayor of Dublin in June last. Members of the city council from Sinn Féin, Labour and a grouping of Independents, have a deal in relation to rotating the mayorship.

He is a candidate in the north inner city ward in the local elections that are to take place later this month. His address for the receipt of correspondence is that of the exploration companies and the Ref pub.