Former Ireland manager passed away at the weekend aged 85 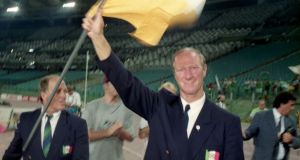 Jack Charlton waves to the Ireland fans after the quarter-final loss to Italy at the 1990 World Cup. Photo: Billy Stickland/Inpho

An online book of condolence has been opened by the Lord Mayor of Dublin Hazel Chu in memory of former Ireland manager Jack Charlton.

Dubliners are being invited to sign the book and leave their own personal tribute to one of the country’s greatest ever sporting icons.

“Jack was an incredibly popular man in this city and right across the country,” said Cllr Chu.

“He was awarded the Freedom of the City of Dublin in 1994, so it’s fitting that we pay our own special tribute to him and give people a chance to say thanks for the memories.”

The book of condolence is available to sign at here.

The Lord Mayor has also announced that the Dublin municipal flag on top of the Mansion House will be flown at half-mast from Tuesday until after Charlton’s funeral.

Dublin City councillor Anthony Flynn has called for a statue of Charlton to be commissioned and placed in a city centre location.

He will sign the FAI online book of condolences on behalf of the people of Cork as a collective but “I would encourage individuals to do likewise”.

He added: “His importance to Irish people, living at home and abroad, was immeasurable and went far beyond the normal confines of football. Jack became a cultural icon, beloved of Irish people.

“His leadership on the soccer pitch gave us the confidence to believe in ourselves as a people again and for that, generations will be grateful. May he rest in peace. Ar dheis Dé go raibh a anam dílis.”

The Football Association of Ireland has also set up a book of condolences which it will share with the Charlton family from Monday, July 27th.

The family of Charlton, who died at the weekend aged 85, say the funeral in Northumberland will be be attended by a small number of people in line with Covid-19 restrictions in England.