A Twelfth apart: ‘It’s very important we celebrate it in some form’

In Northern Ireland 248 bands marched in their areas for the 12 July celebrations. This year the celebrations were subdued as people adhered to Covid-19 guidance, which only allows for up to 30 people to congregate. Video: Freya McClements 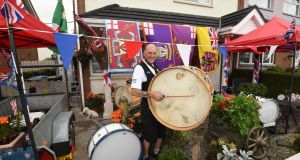 Alan Warke of Different Skins with his collection of Lambeg drums on the Twelth in Newbuildings, Co Derry. Photograph: Trevor McBride

A single drumbeat resonates through the village of Newbuildings, Co Derry.

The thump of the huge Lambeg drum is one of the constants of the “Twelfth”, when members of the Orange Order take part in parades to mark the anniversary of the Battle of the Boyne; this year, drummer Alan Warke is playing in his front garden, and neighbour Tracey Styles must watch from behind her fence.

“It brings tears to your eyes too. It’s emotional, because you’re proud of your culture.”

With the traditional Twelfth demonstrations cancelled to prevent the spread of coronavirus, the call from the Orange Order was instead to celebrate July 12th “online, in your home or at your door”; because it fell on a Sunday, the day has been marked on Monday 13th instead.

Under the coronavirus regulations, up to 30 people are currently permitted to gather outdoors, and almost 250 bands applied to hold small parades in their local areas – among them, the Pride of Orange and Blue Flute Band in Newbuildings.

In the middle of the village, a ceremonial arch decked with flags and bearing images of William of Orange and Queen Elizabeth II has been erected over the road. Lined up in front of it for a brief religious service are about 40-50 bandsmen and, on either side of the road, fewer than 30 members of the local Orange Lodge.

We’re under orders from the Grand Orange Lodge to observe social distancing, and then to disperse and enjoy the day at home

Dressed in suits, sashes and collarettes, they stand roughly 2m apart; the lodge’s banner, which would usually lead them in the parade, is also at the roadside.

“It’s strange,” says John Goligher, the Worshipful Master of Newbuildings Victoria Loyal Orange Lodge. Usually they would march through the village early in the morning, then depart for the main parade. “It’s very important that we celebrated the Twelfth in some form or other.”

As the flutes and drums strike up and the band moves off, the Orangemen step on to the pavement and furl their flags. “We’re under orders from the Grand Orange Lodge to observe social distancing, and then to disperse and enjoy the day at home,” he explains.

“The people in the village have been great. They’ve been decorating their houses and have been following the instructions to stay at home and not follow the band.”

The residents are indeed at home. Some have erected marquees in their front gardens, and are watching the band from deckchairs. “Bandsman in lockdown” reads a sign attached to the front of one house. Many properties have been decorated with flags, and some have created their own Twelfth-themed displays.

“The village is looking well, isn’t it?” goes one overheard conversation between neighbours.

The members of the McCobb-Buchanan-McDonald family, who spent weeks constructing a mini Twelfth parade in their front garden, complete with ceremonial arch, marching Orangemen and a mannequin dressed as William of Orange at the gate.

Normally the band goes round in the morning, and then there’s nothing more, but I think people have reacted more to it this year

“There are four generations of the Orange Order in this family,” says Sandra McCobb, pointing out another mannequin, of a bandsman, by the fence. “It’s all hand-made and hand-painted.”

“For me the Twelfth is about the atmosphere, and the excitement for the kids of seeing the bands,” adds her daughter Stephanie. “We did this especially for the kids, to make memories for them even though they can’t go out to the parade.”

Also watching is Ivan Huey. “It is different,” he says. “We thought there’d be nothing.” He goes to the Twelfth every year “as a day out”, but is pleased to see so much activity in the village.

“Normally the band goes round in the morning, and then there’s nothing more, but I think people have reacted more to it this year. People who normally wouldn’t go and see them marching are now out on the Twelfth.”