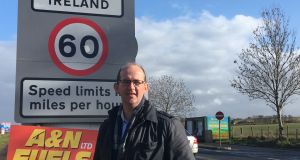 Brian McDermott on the border between Bridgend and Derry. Photograph: Freya McClements

Brian McDermott crosses the Border from his Donegal home in Moville every day to get to his job in Derry, but now he worries that the impending departure of the UK from the European Union could threaten not just his job but also where he lives.

“I would have to question my employment in Northern Ireland if I faced delays and access checks at a border every day,” he says.

However, Border controls could affect him even more.

“If it wasn’t for the opportunities I get in Derry, with the skill-set I have in product development, I’d have to go to Dublin to find a similar job. The potential consequences of Brexit are so unknown, but I’d be concerned about any kind of physical border because it would impact on my day immediately.”

The prospect of Border controls brings back childhood memories for McDermott of “sitting in queues of cars for hours with military uniforms pointing guns in the window”, along with the IRA’s 1990 “human bomb” attack in Coshquin, which killed five British soldiers and Patsy Gillespie, who had been forced to drive the car bomb.

The bombing saw McDermott’s family “literally thrown out of our beds in the early hours of the morning”, he remembers.

“I would hate to go back to the trauma of those days. “My girls have grown up with no memory of that. They’re used to going to Derry in the same way as they go to Letterkenny. ”

His experience is typical of many who live and work along the Border. Some 30,000 people cross the Border daily along its 450km length. Half of them do so to travel to work or school, and many of them do so from Donegal into its natural hinterland of Derry. Most are well-educated, and cross the Border for well-paid jobs in education or healthcare.

“In terms of work-based commuting, it’s all about the northwest,” says Justin Gleeson, the director of the All-Island Research Observatory. “One of the key things that’s come up regarding the Brexit debate is the question of just how connected we are across the Border, and how people are flowing across the Border. If you imagine those 30,000 people crossing the Border on a daily basis, having a real hard Brexit with border controls slowing that whole movement down would completely change everything.

“It’s part of the quality of life in those areas. Having a hard border would completely change the lives of people on both sides. If there are queuing times at the Border, for example, it will have a massive impact on people’s decisions as to whether it’s worthwhile making that journey across the Border.”

Ulster University is typical of many large employers in Derry. Sixty of the 400 staff at the Magee campus live in Donegal.

We joke about whether we’ll have to show our passports when we’re going to work, but that could be a reality

Dr Edel Ennis is a lecturer in psychology at Ulster University and commutes from Ballybofey, Co Donegal, to the university’s campuses in Derry and Coleraine. “I worked in Portsmouth in England for years, but it was having the university in Derry that allowed me to move home.

“The quality of life is better here, and I wanted to live closer to my family. We joke about things like whether we’ll have to show our passports when we’re going to work every morning, but the fact is that could be a reality.

“Everyone says there isn’t going to be a hard border, but how would that actually work? Is anything going to change, or is everything going to change? I already travel an hour to work in Derry, and an hour and 45 minutes to Coleraine, so any sort of checks on the Border would be an absolute nightmare, but I would just have to deal with it.

Commuting delays are worrying the local authorities in Derry and Donegal. In a joint report last February, Donegal County Council and Derry City and Strabane District Council in February warned that “a hard Brexit” would cut trade and investment and kill off the chances of 7,000 jobs for Donegal.

Nobody knows what the post-Brexit world will look like, the report acknowledges. The truth about the impact of Brexit,” it quotes one commentator as saying, “is that it is uncertain, beyond the ability of any human being to forecast and almost entirely dependent on how the process will be managed. ‘Don’t know’ is the technically correct answer.”

Brexit has made uncertainty part of everyday life

For everyone who lives on one side of the Border and works on the other, Brexit has made uncertainty part of everyday life.

“It’s been a long time since I even noticed the Border,” says Brian McDermott. I drive into Derry from Moville along the Foyle every morning.

“When I leave the river behind and see the city approaching all I ever thought was, right, it’s time to start work. Now when I’m driving towards Derry I’m thinking that I’m crossing a border. I’m asking myself, will I be waiting at a checkpoint in two years’ time?”