‘As a nation, we owe him a debt of gratitude for his work,’ says Michael D Higgins 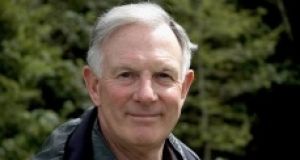 David Shaw-Smith, the Dublin film-maker whose deep interest in the world of traditional crafts led to the celebrated Hands television series, has died.

An early employee of RTÉ, Shaw-Smith began his own film production company in 1970 and would go on to produce a rich archive of documentaries.

During that decade, he, his wife Sally, and sometimes their children, travelled around Ireland on a mission to document the wealth of a nation’s arts and craft traditions as passed from one generation to the next.

“I was very concerned that these wonderful traditional crafts would disappear without a record,” he told Gay Byrne during a subsequent Late Late Show interview in 1984. “It is absolutely inevitable that they will [disappear].”

The resulting Hands series, 28 films in total, is today both a monument to, and visual record of, traditional skills ranging from those of blacksmiths and fishermen to beekeepers and patch workers.

“When David first suggested [the project] the attitude at RTÉ was ‘that old rubbish?’” his wife Sally recalled of their ambitions in an interview with The Irish Times in 2013. “For about four years we kept at them with this. But they were all about looking to the future and being modern – computers and that sort of thing.”

In the end, the couple spent a decade, camera in tow, dutifully recording the nation’s handwoven heritage with a dedication reminiscent of the great American folk music archivist Alan Lomax.

On Tuesday, President Michael D Higgins paid homage to the value of Shaw-Smith’s work, noting that anyone with an interest in Irish culture and history will have been deeply saddened by news of his death.

“As a nation, we owe him a debt of gratitude for his work documenting the arts and crafts traditions across our island,” he said.

Shaw-Smith said he was born “between Dundrum and Sandyford” in Dublin, and lived “in a sort of 1930s house” his parents had built in his grandparents’ estate.

He began his RTÉ career as a floor manager, having joined the broadcaster at its infancy in 1961. As well as Hands, his film company would go on to produce Patterns, and Dublin A Personal View.

As well as numerous documentaries airing all over the world, his first film Connemara And Its Ponies would go on to reach domestic television screens in the US.

David Shaw-Smith died on Saturday, January 16th. A private family funeral and ceremony will take place on Thursday, followed by a celebration of his life at a later date.