AstraZeneca tells HSE vaccine deliveries can be expected by mid-February

The European Commission wants to set up a mechanism that would allow the sharing of surplus Covid-19 vaccines with poorer neighbouring states and Africa, EU health chief Stella Kyriakides has said. Video: Reuters 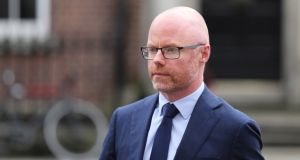 Minister for Health Stephen Donnelly: he told Ministers that planning was under way to mobilise mass vaccination centres and the vaccinators working in them across the State from early February

The European Commission has said that Covid-19 vaccines cannot be delivered before they get regulatory approval, denting Ireland’s hopes of securing early supplies of the AstraZeneca shot.

Minister for Health Stephen Donnelly said last weekend that discussions were under way on securing early deliveries of the vaccine to enable it to be rolled out immediately following regulatory approval.

In response to queries from The Irish Times, a European Commission spokesman said: “Vaccines cannot be delivered before EMA [European Medicines Agency] delivers its recommendation for authorisation and the commission then grants marketing authorisation. This is a requirement as per the Advance Purchase Agreement.”

Asked about the early rollout of the AstraZeneca on RTÉ on Tuesday night, Mr Donnelly said that it was an “ambitious ask” to get the supplies in early, and that it would have to be agreed with both the company and the European Commission as “it would have to be done on an EU basis”.

It comes as Ministers were told during a Cabinet meeting on Tuesday that AstraZeneca has advised the HSE that deliveries of the vaccine can be expected by mid-February, but that firm delivery timetables have not yet been finalised.

At the same meeting Mr Donnelly told colleagues there was a clear protocol in place for Covid-19 vaccinations, which some ministerial colleagues viewed as a response to comments made by his predecessor Simon Harris on the controversy over spare vaccines being given to staff members’ families at the Coombe hospital.

On Monday Mr Harris said the situation in the Coombe suggested there either there was a protocol about distributing excess doses of the vaccine in place that was not followed, “or more concerning, if there isn’t a protocol in place as to what you do if there are so-called spare vaccines”.

Multiple sources said Mr Donnelly told colleagues that while there had been commentary about there being no protocols in place to deal with these situations, there were in fact two, and urged his colleagues to come to him with questions on it directly if they had any.

One of the protocols was not published at the time of the Coombe incident.

While some Government sources were of the view that it was “very clearly” a response to Mr Harris’s comments, others present at the meeting said they did not see it that way.

Cabinet was told preparations were being made for a significant scaling up of the vaccine programme in the weeks ahead, with doses administered growing from 165,000 in January to 770,000 in March. The expansion will rely on the GP and pharmacist network, with vaccinators working in clinics as well as in mass vaccination centres.

Mr Donnelly told Ministers that planning was under way to mobilise mass vaccination centres and the vaccinators working in them across the State from early February in order to facilitate an increase in supply.

The Cabinet was also updated on the IT system being used to record vaccinations, with Ministers told it was now operating across hospitals and long-term care facilities.

While some functions, such as self-registration and the capture of consent and other clinical details, are now live, it is intended that the capacity to schedule second doses will soon be brought on stream.

The Dáil heard last week that as the system was being rolled out, operational issues meant some information had to be recorded using pen and paper before being transferred digitally.

Sources have said the problem centred on the online profiles that were to be set up for individual healthcare practitioners through which they would input data on the vaccines they had administered and the batch numbers.

Problems were encountered at an early stage when these workers could not set up their own profiles for various reasons.