Covid-19 vaccinations to be prioritised for paramedics and firefighters 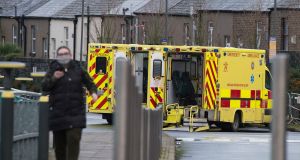 Emergency ambulances from Dublin Fire Brigade: Up to 1,100 firefighters and paramedics work for Dublin City Council, 80 of whom are not available for duty due to having contracted Covid-19 or are close contacts. Photograph: EPA

Paramedics and firefighters in Dublin Fire Brigade who had their Covid-19 vaccine appointments postponed will be prioritised for inoculation this week, it is understood.

Meetings took place on Tuesday between union representatives and healthcare officials after it emerged last week that up to 150 paramedics had their appointments for vaccinations cancelled amid reported supply issues.

It is understood that an expedited programme of vaccination will now be put in place for those workers after some of the vaccine supplies were diverted to nursing homes amid concerns about increasing infections in long-term settings.

“There is a lot of anxiety and a lot of heightened emotion around this, but the situation is that the doses are being split 50:50 between long-term care and frontline healthcare workers every week, and some healthcare workers lost out last week when the supply was diverted,” a source said.

The situation is expected to be resolved this week, representatives for the frontline workers have been told.

It comes as two Independent councillors claimed a local authority was placing the lives of firefighters and ambulance staff “at risk” due to the slow rollout of Covid-19 vaccines.

Up to 1,100 firefighters and paramedics work for Dublin City Council, 80 of whom are not available for duty due to having contracted Covid-19 or are close contacts of those who have.

Independent councillor Anthony Flynn appealed to the council to issue the vaccine to all fire brigade and ambulance staff without delay.

“I’ve asked the chief executive of Dublin City Council tonight to explain why Dublin Fire Brigade haven’t been vaccinated and what is the delay. Dublin Fire Brigade are under the direct remit of the council. It’s our responsibility to protect them,” said Cllr Flynn.

He said the council’s chief executive, Owen Keegan, replied that 25 per cent of Dublin Fire Brigade have had inoculations so far and that would increase this week. “He has said he would be reluctant to interfere with the process. This isn’t good enough in my opinion.”

Dublin north inner city councillor Christy Burke said he had been approached by a number of employee and union representatives who were concerned for the health, safety and lives of fire services personnel.

“I have been in contact with Dublin City Council officials and HSE management when I was informed about this by several fire service personnel representatives who are extremely concerned about the situation,” Cllr Burke said. “I’m bewildered that these men and women are being treated like this. They put their lives on the line for others, and are called to situations where they have to give CPR to seriously ill people, and they are putting their lives at risk.”

In a statement, the council said Dublin Fire Brigade management were working with the HSE/National Ambulance Service to ensure the most efficient process for the delivery of vaccinations.

“Logistics, planning and the availability of the vaccine will determine the pace of the vaccination programme,” it said.

Chief firefighter Dennis Keeley said the brigade recorded at least a 21 per cent increase in calls to the emergency service last year compared with the same period in 2019.