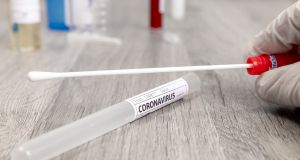 A cluster or outbreak is generally defined as two or more cases detected and verified in one place. Photograph: iStock

The number of reported Covid-19 outbreaks or clusters rose by 73 in the second week of the year compared to the first, reaching 293.

A cluster or outbreak is generally defined as two or more cases detected and verified in one place.

During week two, ending on January 16th, 41 workplace outbreaks were recorded, compared to 26 the previous week, according to the weekly data compiled by the Health Protection Surveillance Centre (HPSC).

The latest batch included nine associated with the defence, justice and emergency services and the same number in food production.

Four outbreaks were recorded in the commercial sector and five in office-based settings, with the remainder spread across various sectors including manufacturing and construction.

In total, since the beginning of August when the second wave of Covid-19 took hold in Ireland, 367 outbreaks have been recorded in workplace settings. That included 69 in businesses associated with the production or processing of food. Of those, 43 were in the processing of meat, poultry and fish, a sector that has received much attention during the pandemic.

While schools have remained closed, the latest data notes 22 outbreaks in week two associated with childcare facilities or with school children and staff, although the report points out that transmission within a school has not necessarily been established.

Just one travel or transport-associated outbreak was recorded.

There were 48 new outbreaks in nursing homes and community hospitals or long-stay units; and 37 in acute hospitals. There were 65 outbreaks reported in residential institutions including 45 in centres for disabilities, five in children’s or centres run by Tusla, the child and family agency, and six in mental health facilities.

The HSPC reported 23 new outbreaks across vulnerable populations during week two which included seven in Direct Provision Centres; 14 among the Traveller population (with 25 confirmed linked cases) and two outbreaks among the homeless population.

There have now been 11,275 clusters or outbreaks reported since last March. However, the HSPC said this total is likely to be an underestimation due to reporting delays as a consequence of the recent surge.

Since August 2nd, the 73 per cent of 9,009 outbreaks were found in private homes. The more recent data on private homes is considered to be underestimated, again due to pressures on the system during the surge.

Of all outbreaks in the period, 6,377 are classified as “open”. In order to declare an outbreak “closed”, the location should not have experienced any new cases of infection for 28 days.