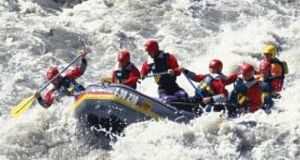 Dublin City Council promised to drop claims it was owed about €12 million from the Department of Housing following the wind-up of the Dublin Docklands Development Authority (DDDA), “in return for grant assistance” for its proposed white-water rafting facility.

The council had taken on significant costs after the Docklands authority, established in 1997, was wound up in 2016, such as pension liabilities, upkeep costs to roads and public areas, repairs to the Jeanie Johnson tall ship and legal costs.

Last December, Dublin city councillors voted to approve plans to build a white-water rapids rafting facility at George’s Dock, beside the CHQ building in Dublin city centre, at a cost of €23 million. They were told €13 million would come from grants primarily drawn from central Government, €4m from council reserves and just under €5 million from development levies.

The previous month, council chief executive Owen Keegan wrote to the Department of Housing to pitch for funding for the project, according to correspondence seen by The Irish Times.

Mr Keegan said the council and the department had previously discussed “the resolution of the financial issues arising from the dissolution of the DDDA” which had transferred its “functions, assets and liabilities” to the council.

The November 21st letter suggested rather than “engaging in prolonged correspondence with the department on this matter, with little hope of a successful outcome”, the council would agree to accept the additional costs “in return for grant assistance” towards the white-water rafting project.

The correspondence was released under Freedom of Information acts.

A council spokeswoman said the most recent estimate of the liabilities taken on from the defunct Docklands authority was about €12 million, but the total cost “will not be finalised for some time”.

While the council had pursued the matter “there is no legal obligation on the department to compensate the city council in respect of these costs”, she said.

Voting under way in the Dáil to elect the next taoiseach 19:13
Woman left in middle of nowhere after being raped by three Dublin teenagers, court told 18:56
Harris signs order to designate coronavirus as a notifiable disease 18:42
Patricia O’Connor murder trial: Jury asked to park ‘shocking’ nature of case outside door 18:37
Teenage girl (16) killed in Cork crash named as Kimberly O’Connor 18:30