Submission to NTA welcomes the spreading of Dublin bus routes in BusConnects, but says there are some ‘missed opportunities’ 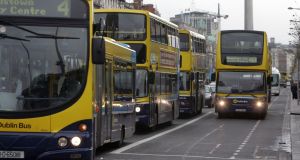 BusConnects aims to overhaul the Dublin bus system by creating 230km of dedicated bus lanes and 200km of cycle tracks along 16 of the busiest corridors. Photograph: Cyril Byrne

Dublin City Council has said the current situation of too many bus routes on the same streets and not enough of a spread of services through the city centre “is not something we feel can or should continue”.

The comments were made in a submission from the council’s transportation department to the National Transport Authority (NTA) in relation to the BusConnects project in December.

The council said it “very much” welcomes the spreading of bus routes under the proposed plans. “The current situation of too many routes on the same streets and not enough spread of services through the core city centre is not something we feel can or should continue,” it said.

The council said the bus network in Dublin was at present and for the foreseeable future “the workhouse of public transport”. “The current investment and network redesign was both welcome and overdue.”

However, the council said it felt there were some “missed opportunities” in the latest plans, published in October, “to provide strong and consistent bus routings in the city centre”.

The council has asked that the A spine alignment be reviewed, and that it should use Dawson Street/Kildare Street and then connect to Camden Street at Wexford Street and Harcourt Street instead of using George’s Street.

“This would bring some bus services back to Harcourt Street in one direction, which we would welcome and would result in a considerable reduction of bus numbers on George’s Street.

“There may be other opportunities to investigate moving some more services to this alignment.”

The submission also said it should be noted that the Camden Street/George’s Street axis into the centre was one of the busiest cycling routes in the city, and “this route has minimal amount of space to provide dedicated bus and cycle lanes”.

“A better policy we believe would be to make this route the primary cycling axis to the city centre. By changing the routing for the majority of buses on this axis to routes which have more capacity to provide the level of bus priority required, for example Stephen’s Green, the now mostly public transport Dawson Street and the high capacity route around Trinity College/Nassau Street, we can achieve better cycling provision and a better and more reliable bus service in the city centre.”

The NTA is currently reviewing all submissions, and will not comment on individual submissions “until the review is complete”.