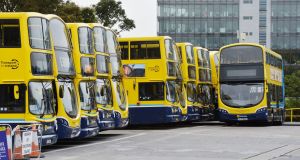 When asked by an inspector to specify the defect on the seat, the driver allegedly pointed to a crease on the left side of the seat cloth. Photograph: Alan Betson

Dublin Bus sacked a long-serving bus driver after he declared 10 buses defective over a two-day period because of “collapsed cushions” for his driver’s seat.

All of the buses were subsequently examined by Dublin Bus engineers, and mechanics could find nothing wrong with the seats.

In one of the buses claimed by the driver to be defective on January 23rd, 2019, it had been fitted with a new seat just two days previously.

When asked by an inspector to specify the defect on the seat, the driver allegedly pointed to a crease on the left side of the seat cloth.

Some of the buses said to be defective by the bus driver were in instances where the driver had taken over from colleagues who had driven them without complaint.

The driver was sacked by Dublin Bus for gross misconduct after it found that the complaints about the seats were not genuine complaints but instead “a deliberate disruption” of services by the driver.

The driver worked for Dublin Bus from September 2001 until his dismissal on May 31st last.

Mr Dolan found that on the balance of probabilities the seats in question were not defective and the decision to dismiss was proportionate.

In an outline of the events, the driver commenced duty on January 21st, 2019, at 3.48pm and took over a bus that had been driven by a colleague.

The bus was full of passengers but the driver called central control to say the bus was defective because he claimed the driver’s seat cushion had collapsed.

A replacement bus arrived at 4.15pm. However, the driver contacted central control after a short period to advise that this bus was also defective for the same reason.

Another replacement bus was brought to Parnell Square West and the driver reported this bus as also being defective because the driver’s seat cushion had collapsed.

Two days later the driver reported for duty at Parnell Square West and once again contacted central control to report that the bus was defective because of the driver’s seat – the eighth bus to be declared defective. The chief inspector at Dublin Bus approached the driver and the driver explained that he had disc problems in his back.

The driver was allocated a ninth bus and subsequently a 10th bus. In both cases he again reported that the bus was defective because of the seat. The driver was then called into the inspector’s office and was told he would not be allocated any more buses.

Dublin Bus told the Workplace Relations Commission hearing that it was conscious that bus seats have been a problem in the past and it had spent a large amount of time and money getting them right. The driver told the commission he had a back disc problem, which could be compounded if the bus driver seat was not correctly fitted.