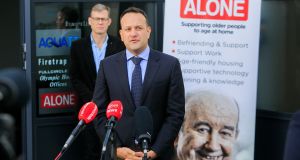 An Taoiseach Leo Varadkar TD during a visit to ALONE. Photograph: Gareth Chaney/Collins

A multi-billion euro package of income support to help employers keep people in work during the coronavirus crisis, and substantially increase welfare payments for those who have been laid off, is likely to be announced over the next 24 hours.

Taoiseach Leo Varadkar said on Monday the Government had been working on an income support package over the weekend and would hopefully be in a position to conclude it by Tuesday.

Mr Varadkar also said crucial emergency legislation to help the State deal with the Covid-19 crisis needed to be pushed through the Oireachtas this week otherwise it may me unconstitutional.

The elections to form a new Seanad Éireann takes place early next week. However, in the absence of a new government in place, the taoiseach’s eleven nominations to the Upper House cannot be named.

Mr Varadkar confirmed on Monday that his status as outgoing taoiseach meant he could not nominate the 11 senators. That will result in the Seanad not being in a position to pass new laws until a new Government is formed and the Taoiseach’s nominees have been named.

The Taoiseach said that the consequence of that was the Government will now need to pass a raft of far-reaching legislation this week to allow it respond to the coronavirus emergency. That will include an exceptional multi-billion financial package to help employers keep people in employment and also to give more financial support to people who have lost their jobs.

“We will be recalling the Seanad to put through legislation before the weekend,” said Mr Varadkar.

“There is a question as to whether the (new) Seanad is legally constituted in the absence of Taoiseach’s nominees.”

He said the Government would try to get through as much legislation as it could this week. He said it was an open question if legislation is needed after that.

The Government has been criticised for its financial support commitments to employers and employees adversely affected by the Covid-19 emergency, which is below the average of the packages that have been offered by other EU governments. The €203 payment announced earlier this month for those who have lost their jobs has come in for particular criticism as being far too low.

“There are really two aspects of what we need to do,” said Mr Varadkar on Monday. “One is an enhanced payment for people who’ve lost their jobs, and the other is payments for employers to encourage them to keep people on their payroll.

“So as you know, for somebody who’s lost their job. They get a minimum now 203 euros a week, as compared to only £100 a week in Northern Ireland, or the UK, but we think that’s too low, given the circumstances, and we need to hold our society together.

“So we’re going to increase that payments. we’re working on that at the moment.

“And the second thing is having something in place for employers to encourage employers if they can to keep people on the payroll, but obviously this is going to be very expensive,” said Mr Varadkar.

Other governments have announced record amounts of spending to prop up their economies, and ensure people have enough income to survive, during the course of the crisis which has led to economic collapse for many sectors.

He also criticised as “rubbish” a suggestion by Sinn Féin leader that the Government use the €13 billion in Apple tax money in an escrow account for the emergency. He said the money did not belong to the State.

The Taoiseach sounded a note of caution about the overall amount that the State can afford.

“We need to bear in mind that whatever we do now, we need to be able to pay the bill in the future, we have to bear that in mind,” he warned.

Asked about the suggestion by Ms McDonald that the State should now utilise the €13 billion “Apple tax” money, which is being kept in an escrow account, Mr Varadkar said the money was not the Irish Government’s but was the subject of a tax dispute between Apple and the EU.

He said that if the EU were to win the case, the money would be distributed not in Ireland but to all EU countries where that tax might apply. He said Ms McDonald should know better and described her suggestion as “rubbish”.