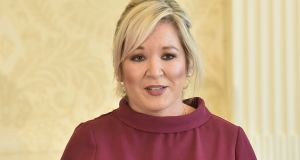 Michelle O’Neill was overcome temporarily when asked a question by Traditional Unionist Voice leader Jim Allister about one of his North Antrim constituents who has cancer. Photograph: PA

The number of coronavirus cases in Northern Ireland has increased by 20 as from Monday afternoon, bringing the number of cases in the North to 148, the North’s Department of Health has announced.

There also were twenty new cases reported on Sunday. To date two people have died of the virus in the North.

So far 2,692 Covid-19 tests have been completed in Northern Ireland.

Of the total of confirmed cases 84 are male and 64 are female. The results show that confirmed tests are fairly equal across the different age groups.

The North’s Minister for Health Robin Swann of the Ulster Unionist Party said that in a few short weeks the Covid-19 crisis “could very rapidly dwarf the impact of the Troubles on our society”.

“The very same virus that is creating untold devastation in Italy and elsewhere . . . If the looming Covid-19 surge isn’t pushed back, then no health service in the world would be able to cope,” he said.

“However, we still have time. Please follow the advice: stay at home, wash your hands, keep your distance. Protect yourself, protect others, protect the NHS.”

She was overcome temporarily with emotion when asked a question by Traditional Unionist Voice leader Jim Allister about one of his North Antrim constituents who has cancer.

He asked what should he say to the family of a 32-year-old mother who had contacted him.

“She has very serious cancer. She has got a two-year-old child and she has just been told that her chemotherapy is going to end because choices have to be made as to who will be treated,” asked Mr Allister.

Questioning paused so that Ms O’Neill could regain her composure.

“There aren’t any good answers to those kinds of questions,” she said when able to resume.