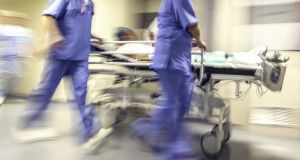 Violent attacks against nurses in hospitals are rising, the latest figures show.

Officially recorded incidents show more than 10 assaults every week against frontline nurses last year, up from 559 during 2016 to 587 last year. They include physical, verbal and sexual attacks.

Already this year up to the end of April, 155 nurses had been attacked at work, according to the Health Service Executive’s National Incident Management System (NIMS), set up three years ago to log all assaults.

But Phil Ní Sheaghdha, general secretary of the Irish Nurses’ and Midwives’ Organisation (INMO), said the reality is much more stark, because the HSE does not record assaults on nurses working in dozens of so-called voluntary hospitals.

There are 28 voluntary hospitals in the country, including St James’s, St Vincent’s, Tallaght, Beaumont and the Mater in Dublin as well as the Mercy University Hospital in Cork and St John’s in Limerick.

“The official figures don’t tell the entire story – the voluntary hospitals would also have a similar number of assaults,” said Ms Ní Sheaghdha.

Nor do the figures depict the gravity of some of the attacks and the resulting psychological injuries suffered by nurses. Some particularly horrific assaults are “career ending”, Ms Ní Sheaghdha said.

“One nurse in her late 50s, somebody grabbed her from behind, around her neck, dragged her into a side room,” she said.

“The assailant was a young man, in his mid-20s, and there was no facility for her to raise an alarm. Fortunately a patient raised the alarm and she was rescued.

“She had skin abrasions, muscular tissue damage, but the psychological effects of that happening to her were so severe that she found it very difficult to go back.”

The official figures show assaults on nurses occur with the greatest frequency at the Ireland East Hospital Group. And attacks have been rising in the group’s hospitals – which includes Midland Regional Hospital, Mullingar, Wexford General Hospital and Our Lady’s Hospital, Navan – over the past three years. Although this is the largest group in the country, the majority of its hospitals are voluntary, where assaults are not logged by the HSE.

Over the same period, attacks have also been rising at Dublin Midlands, Saolta and University Limerick Midwest groups, but declining at RCSI Dublin North East and South/South West groups.

Additional security at hospitals and tougher sentencing for assailants would help, but the “biggest fix” would be more nursing staff, Ms Ní Sheaghdha said.

“Assaults go up when staffing levels go down. Research shows this,” she said.

“A nurse has no control in these situations where poor unfortunates are waiting and waiting for hours to be seen, and people get very frustrated and do tend to take it out on the person they visibly see.

“We need more staff to get rid of the unacceptable waiting times.”

There are 2,000 fewer nurses now compared with 2007, according to the INMO, which wants to see an additional 4,000 recruited this year and next.

“That is just to stand still. More nurses will be required for promised new beds,” added Ms Ní Sheaghdha.

Louise O’Reilly, Sinn Féin’s health spokeswoman, who obtained the figures, said the “worrying trend of increase in assaults against nurses should cause concern at the highest levels in the HSE”.

“Central to this rise in assaults is the recruitment and retention crisis in the HSE,” she said.

Nicholas J Parkinson, head of national health and safety at the HSE, told Ms O’Reilly in a letter: “The figures show that there is a level of annual fluctuation in the reported incidents . . . however, we would anticipate a rise in the number of recorded incidents as NIMS becomes further embedded in the system and the organisation continues to encourage the reporting of all incidents (regardless of the level of harm, if any)”.