Teachers fear consequences of coming out as gay

‘You’re censoring yourself: you say 'my partner', you say they' instead of she or he’ 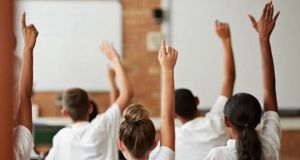 The INTO will this week use the rainbow logo in correspondence.

Many teachers fear that coming out as gay will have an impact on their career, according to Irish National Teachers Organisation members.

The organisation is rebranding itself this week, and in a symbolic gesture of solidarity with LGBT teachers and students the union is using the rainbow logo in correspondence.

The union says it wants to be an ally for LGBT teachers many of whom fear bias and discrimination at work.

Damien McGrath, now retired, was a founder member of the INTO’s LGBT group, which started in 1979.

“When you were ashamed of being gay, with your colleagues, you certainly felt that you couldn’t let your students know you were gay and doubly so hiding it from their parents, this whole mask was being maintained,” he told RTÉ’s Morning Ireland.

Another member of the union’s LGBT group Niall Perrill added: “My first year I worked in a religious school, it was around the same time that I was coming out, I found it very, very difficult, it was coming towards the end of the school year and I distinctly remember the principal telling me ‘there’s jobs coming up here, make sure you apply’, and I was saying no, I don’t want to apply to this school because it’s religious run and I don’t want to be the next big drama in the school.

“In my head that’s what I was thinking, I don’t think I can take this on. I’d rather go to an Educate Together school, a school that I feel would be more welcoming. Since then I’ve said I’ll stick to Educate Together, where my experience has been really, really positive.”

The secretary of the INTO’s LGBT group, Sean Hegarty says teachers from around the country regularly contact them and tell a similar story.

“Teachers who teach in religious schools are told, ‘well you know if you want to continue working here in this school or if you want to get a job in the local area you can’t be ‘out’ - get back into the closet’. That’s shocking in 2018.”

Jean Louise McCarthy says that in many schools an anti LGBT culture persists.

“There are still schools where you cannot be yourself, I now have permanency and this is the first time that I’ve been openly out and comfortable being out as a gay woman.

“It’s 2018, but you’re constantly censoring yourself, you say my partner, you use the plural you say they instead of she or he depending who it is, it’s a constant battle with yourself.

“Do I show who I really am or do I protect my job?

“Ireland’s very small, if you’re working in a Catholic school or a Church of Ireland, Presbyterian school and the principal doesn’t take fancy to you being gay - they have a network that can be very difficult for you then to get in to other schools.”

Niall Perrill agrees - “it’s the fear, that parents are going to come in and say I don’t want this teacher teaching my child, or the chairman of the board of management will come in, usually a religious figure will come in and not really say anything because, obviously he can’t, but kind of almost looking down.”

Cecilia Gavigan, chair of the INTO’s LGBT group says the role of school principal is key.

“There would be parents in my school who are very religious, but I think the thing that has meant I don’t mind being public about things is because the principal is so strong and has been so supportive in all the contacts, so I know if a parent came in the principal would just tell them to go away.”