Drumshanbo in mourning as funeral of five-year-old takes place 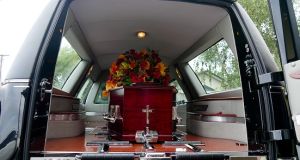 A gloom settled over the small town of Drumshanbo, Co Leitrim, on Wednesday as the funeral of five-year-old Conor Campbell took place.

The boy died in an accident on a Tulsk farm in Co Roscommon on Sunday evening. He was injured fatally after falling from a trailer on the farm and was pronounced dead at the scene.

The funeral Mass took place in St Patrick’s Church, Drumshanbo, in the afternoon but due to physical distancing rules only 10 people are permitted to attend funeral services during the pandemic. The child is survived by his parents Emma and Joseph and two young brothers, Mark and James.

Fr Frankie Murray, who delivered the funeral Mass, said the “whole community is heartbroken” at the death of the small child. There was a “gloom” hanging over the small Leitrim town, with self-isolation requirements of the Covid-19 crisis adding to the family sadness, he said.

There had been a “great outpouring of love” for the family since Sunday’s mishap, he said. The boy had “loved the farm” and when other workers were getting their wages he would always ask his father, “where’s my pay?” said Fr Murray.

His mother Emma is a nurse and the family’s grief has been compounded as her father is struggling with Covid-19 in hospital.

Restrictions on funeral Masses presented difficulties and meant extended family could not travel to attend, said Fr Murray. However a socially-distanced guard of honour lined up outside the church during the service, he added.

Fr Murray said it is the “most difficult [thing to do] by far to bury a child” and during his time as a priest he has delivered funeral Masses of seven children.

“I can remember all of them, it never leaves you,” he said.