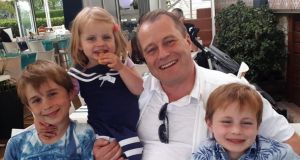 Andrew McGinley, the father of three young children who were found dead at their Dublin home in January, has been “humbled” by the “overwhelming” response to his request for people to write to him.

“These letters have helped me so much and have significantly lifted my spirits,” Mr McGinley said.

He asked people to write to him earlier this month, as he struggled with isolation after the deaths of his children, nine-year-old Conor, seven-year-old Darragh and three-year-old Carla. Now he has made another appeal for people to find someone else in their community who might appreciate support.

“Funny, poignant, comforting and touching are just some of the words I would use to describe the responses,” Mr McGinley wrote of the more than 1,000 letters and cards he has received since he first made the appeal, on his @conorsclips account on Twitter.

He is reading “each and every message I get” and has still to open the vast majority of the correspondence, he said, in a letter to the Irish Times Letters page. He added: “As much as I would like to write back to everyone it would simply be impossible to do so.”

Mr McGinley was only one person who needs support, he wrote, appealing to people to “find someone else in your community who could do with a similar boost. It could be a letter, a call, a two kilometre walk or a socially distant chat at their front door.”

Referring to the YouTube channel he has set up as a promise to his son, he said it gave him great comfort to know that “many people have watched Conor’s Clips on YouTube”.

He has also been comforted by the knowledge that “they can see how happy and joyful that Conor, Darragh and Carla were.”

The children’s mother, Deirdre Morley, has since been charged with their murder but has been too unwell to attend court.