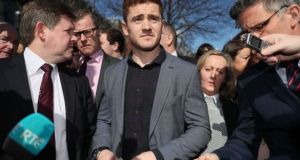 Luke Rossiter sent a tweet saying he was ‘delighted for Paddy Jackson,’ before referring to the complainant in the case in a derogatory manner.

Drogheda United player Luke Rossiter (19) has apologised over a tweet he sent last week which referred to the complainant in the recent Belfast rape trial in derogatory terms.

The League of Ireland player described sending the tweet, on the day the verdict was announced, as “a stupid and immature thing to do”.

Shortly after the verdict was announced, Rossiter sent a tweet saying he was “delighted for Paddy Jackson”, before referring to the complainant in the case in a derogatory manner.

In a statement released on Monday, Rossiter said he was “deeply sorry” for the social media post. “The truth is I don’t really know why I did it as I have no reasoning behind it,” he said.

Rossiter said his actions had let down and hurt his family, his teammates, manager, and the fans of the Co Louth football club.

“It is clear I still have some growing up to do in relation to how I conduct myself off the pitch as well as on it,” he said.

In his statement, he promised to donate any money he received from Drogheda United over the remainder of the season to Rape Crisis North East, a Dundalk-based counselling centre for victims of rape, sexual assault and abuse.

Rossiter said he was “keen to learn” how such sensitive issues can “impact and affect people’s lives”.

Drogheda United are conducting an internal investigation into the player’s actions, and a spokesman for the club said Rossiter “has been informed that he will not be considered for selection” until the review is complete.

The football club is carrying out a general review of its social media policy for players, and plans to educate players and staff on the “impact their opinions and actions can have on others,” the spokesman said.

Shortly after the tweet last week, Drogheda United said it was “horrified” at the remarks, which it said were in “no way representative of the club”.