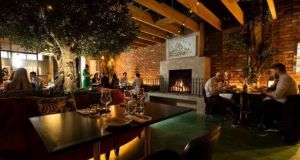 Dr Ronan Glynn said the National Public Health Emergency Team was aware of the impact of the ban on indoor dining in Dublin.

Decisions on how to stop Covid-19 cannot be made on the basis of whether an industry is struggling or not, acting chief medical officer Dr Ronan Glynn has said.

Dr Glynn said the National Public Health Emergency Team (NPHET) was aware of the impact of the ban on indoor dining in Dublin for the next three weeks.

However, he added: “That cannot influence public health decisions when we are seeing the hospitalisations, admissions to critical care and the deaths we have seen in recent days.”

Dr Glynn was asked at the NPHET briefing on Wednesday why Dublin was the only capital city in Europe to ban indoor dining in restaurants and bars and keep the wet pubs shut.

He was also asked why NPHET had decided on that approach when bars and restaurants will remain open in the UK albeit with more restricted hours.

“The narrative in recent days that we are not ‘living with the virus ’at the moment is, to my mind, completely incorrect,” he said.

“People across Dublin are going to work or at least they are working from home. Children across the country are going to school. This is all in the context of the pandemic.”

He said there was too great a focus on the “small but significant element of society that is not open to the detriment of the reality that the vast majority of society is open despite a highly infectious disease”.

Prof Philip Nolan, chair of the NPHET Irish Epidemiological Modelling Advisory Group reiterated that international evidence was the reason why it recommended a ban on indoor dining in Dublin for three weeks.

Prof Nolan tweeted on Friday last that NPHET would like to go back and find out where people contracted the virus “but we don’t have the time or resources to pursue this academic exercise”.

Instead, he said there was “lots of international evidence from better resourced systems on how the virus transmits: we know that social settings, including bars and restaurants, drive community transmission”.

On foot of his tweets, the Restaurant Association of Ireland asked NPHET to publish the international evidence he was referring to.

On Wednesday, Prof Nolan cited three strands to the international evidence that indoor bars and restaurants were significant locations for the spread of Covid-19.

The first was where individual outbreaks have been tracked back to bars and the virus genome sequence has been established.

The second was a case control study which involved taking a sample of people who have tested positive for the virus and tracking back where they have been for up to two weeks. He hoped that such an exercise could be replicated in Ireland.

The third form of evidence was modelling anticipated outcomes from prolonged exposure in an indoor setting such as a restaurant or bar.

“The evidence is diverse from a wide range of settings and falls into those three categories,” Prof Nolan added.