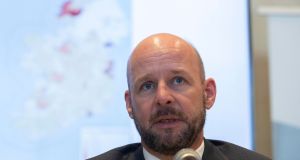 Rising coronavirus infections among older people was a “grave concern” as four times more people aged over 65 have caught the disease than five weeks ago, State health officials have said.

“If we are starting to suppress the virus again, it is essential that we maintain this effort: limit our social contacts, limit mixing between households. The next 10 days are critical," he told journalists at a briefing by the National Public Health Emergency Team.

“This week, we are, unfortunately, seeing continuing increases in all metrics of the disease,” he added.

He said that it was “worrying” to report one to two admissions every day of people with Covid-19 to intensive care units and seven new admissions to hospital on average over the past week. There were 95 people in hospital with Covid-19 on Wednesday and 16 in ICU units.

The majority of people admitted to ICU were under 65 and “quite a few are young,” he said.

There has also been an increase in deaths this month as a result of the increase in infections with one to three deaths per day on average being reported of the past two weeks.

“We started to mix more than was safe and in an unsafe manner going back several weeks now and the transmissions that occurred then are catching up on us now,” said Prof Nolan.

NPHET reported two more deaths from Covid-19, bringing the death toll to 1,794, and 234 new cases of the disease, bringing the total number of known cases to 33,675.

Some 68 per cent of the new cases were in people under the age of 45.

Prof Nolan said that it was “too early” to say the spread of the disease had stabilised with the 14-day cumulative infection rate not rising as fast as it has over the past week.

It would be another several days ”or perhaps another week” before it could be seen whether the additional restrictions announced for Dublin last week were having any effect, he said.

NPHET will meet on Thursday but the State’s acting chief medical officer Dr Glynn would not speculate on whether public health officials would recommend moving other counties where infections were high up to the Level 3 public restrictions currently imposed on Dublin.

“We are moving into a second chapter, particularly difficult time for the country because everyone is sick and tired of this at this stage and the idea of restricting measures, decreasing our social contacts is frankly a horrible one for people,” said Dr Glynn.

He raised specific warnings about increasing infection rates in Donegal, Louth and Waterford along with parts of north Wicklow and east Kildare that border Dublin.

“If we all cut our contacts by half, we will have an enormous impact on the spread of this disease across the country,” he said.

Prof Nolan said that the incidence rate in Dublin remains three to four times higher than the rest of the country but it is growing at approximately the same rate across the country.

“The rest of the country may be a week or two behind where Dublin is but it will catch up unless behaviours across the entire country change,” he said.

Dr Glynn said that the country was facing a “significant challenge” with the reopening of third-level institutions as public health officials dismissed the view of Sweden’s former chief epidemiologist Dr Johan Giesecke at the Oireachtas Covid-19 that there should be “controlled spread” among the under 60s and a “tolerable spread” of the virus in the over 60s.

HSE chief clinical officer Dr Colm Henry said it was not possible to keep nursing homes and congregated older settings completely immune from a virus openly spreading through the community. It also ignored the long-term effect of Covid-19 on infected younger people, he said.

Prof Nolan said that it would also result in the deaths of some younger people.

Earlier, it emerged the 14-day incidence rate of coronavirus infections across Dublin has fallen for the first time in two weeks, according to the latest figures published by the Health Protection Surveillance Centre.

The rate of Covid-19 infections over the period fell marginally in Dublin, from 138 cases per 100,000 at midnight on Sunday to 136.9 at midnight on Monday - three days after the new Level 3 restrictions were introduced in the county, while the rest of the country remained on Level 2.

This is the first time that the infection rate in Dublin has fallen since September 8th.

While the incidence rate in Dublin declined slightly in the latest figures, the national average continues to rise, reflecting an increase in the infections outside the capital.

Infectious diseases expert Professor Sam McConkey highlighted the importance of people following the public health advice, saying that if cases continued to rise Dublin could need to go to Level 4 or even Level 5

Prof McConkey, who is head of the Department of International Health and Tropical Medicine at the Royal College of Surgeons in Ireland (RCSI), said this was the time to take action.

“The earlier we do it, the less duration and the less restrictive those measures will have to be,” he told Newstalk.

The rate of Covid-19 cases had gone up in four or five counties to almost the same level as Dublin and action was required now, he added.

“Unfortunately, if the number of cases continues to rise, whether in Dublin or in those counties, then unfortunately the only sensible thing to do is to go up to Level 4 or even Level 5.”