Donations of masks, gloves and sanitiser flood in for Derry health workers 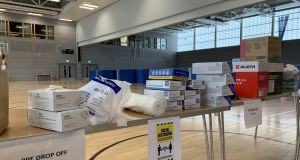 Andy McCarter adds another box of disposable gloves to the pile. He bought it online, he explains, “just in case”; now he has decided to donate it to local medics.

“The people on the front line need them more than I do,” he says. “So many doctors and nurses are getting it really tough, and you just have this feeling of helplessness. But everyone can do their little bit to help.”

He was one of many who responded to an appealfor personal protective equipment (PPE) by the Derry GP Federation, which represents 28 general practices and around 200,000 patients from Limavady, Co Derry, to Castlederg, Co Tyrone.

It evolved organically; local businesses and individuals had already begun contacting a local GP, Dr Nicola Duffy, to ask if they could help by donating spare items of PPE. At one pointshe said her house had turned into “a bit of a depot”.

Derry City and Strabane District Council had received similar offers, so they decided to team up with the GP Federation; the council offered its leisure centre as a drop-off point, and the federation would collect, check and distribute the donations to ensure they are used where they are most needed.

There has been much concern – and controversy – over the availability of PPE in the North. On Friday it emerged that an order for PPE from China which the North’s Minister for Finance, Conor Murphy, announced had been made jointly with the Irish Government had not been placed.

The North’s Minister for Health, Robin Swann, said he was “acutely aware” of the concerns regarding PPE, and while there were “significant stores” in place there was “not a country in the world that has enough PPE in stock”. He was “aggressively pursuing all feasible routes, nationally, international and local[ly].”

While five million pieces of PPE from UK government stocks arrived in Northern Ireland on Monday, GP have been expressing concern about the ability to maintain supply.

The chair of the British Medical Association (BMA) in Northern Ireland, Dr Tom Black, said late last week while he has been assured there were “adequate supplies of appropriate PPE” there were “real concerns and real worries that we’ll be able to maintain them”.

“All GPs are concerned about PPE,” says the former chair of the GP Federation, Dr Martin McCloskey. This appeal will help with “the community side of things–for GPs, for district nurses, nurses working in nursing homes and domiciliary care workers going into patients”, as well as people caring for family members at home.

“We shouldn’t be here,” says Dr McCloskey on the need for donated equipment, “but I don’t see any point in agonising about how we got here.

“The fact is it’s where we are, so it’s about trying to make the best of it, and trying to get us into a better position.”

Donations have been coming from all quarters. Ireland international soccer player James McClean has purchased PPE and sanitiser for the appeal online; at the Foyle Arena members of the public had done the same.

Maria Hribar arrived with a paper bag full of gloves and hand sanitiser which she had bought specially in a local chemist.

“”Our healthcare workers are out there saving lives,” she says, “but we all have to help look after our elderly people and to protect ourselves.”

“It’s the last bits we had,” he says. “Everybody feels you can’t really help unless you’re a healthcare worker, but if you do small bits here and there, you maybe feel less helpless.

“There seem to be a lot of mixed messages. One day you read there are plans about PPE, and the next that they’re crying out for it. This was sitting here, so they may as well use it. It’s better to have too much than none at all.”

The donations are now being assessed and sorted, to have them ready for use.

“There’s a lot of goodwill out there,” says Dr McCloskey, “and there are people trying to do things who are desperate to do something. I think it’s just nice to be able to involve the community and to acknowledge their help, and to try and make their help as effective as possible.”