Woman and man in 40s arrested; army take suspected pipebomb away for examination 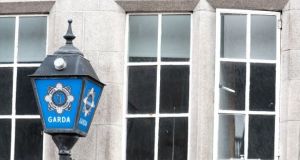 Gardaí have arrested two people following the seizure of a suspected firearm, a suspected pipe bomb and around €27,000 in cash in Co Limerick on Sunday evening.

Shortly before 8,30pm on Sunday, gardaí from Henry Street in Co Limerick were on patrol when they stopped and searched a car in the Castleconnell area.

A man, aged in his 40s, was arrested and brought to Henry Street Garda station. He is currently detained under Section 4 of the Criminal Justice Act, 1984.

Two follow up searches were carried out at houses in the Castleconnell area later that evening.

At the first house, gardaí seized a suspected firearm and pipe bomb. A woman in her 40s was arrested and she is currently detained at Henry Street Garda station under Section 30 Offences Against The State Act, 1939.

The Army Explosive Ordnance Disposal team attended the scene and the suspected pipe bomb was taken for further examination.

At the second house, gardaí seized €1,000 of suspected cannabis herb. No arrests were made following this seizure.

All of the items seized will now be sent for technical analysis, a spokesman for the gardaí said.

Garda investigating ‘possible immigration offence’ after men seen alighting truck 18:09
Coronavirus: No new deaths and 11 further cases reported 18:22
Racism towards Travellers is ‘normalised’ in Ireland, says senator 17:46
Croke Park opens up pitch for Muslim prayer service 17:31
Covid-19: Calls for flights from the US to be suspended from opposition parties 16:57

1 Johnny Depp tells court Amber Heard threw ‘haymaker’ punch at him
2 ‘I thought it was a hoax’: Patient dies after Texas Covid party
3 US passengers fly into Dublin: ‘I’m here for six days. I guess I’ll have to stay inside’
4 Maureen Dowd: Biden has his limitations but he’s no Trump
5 White House turns its fire on Anthony Fauci over Covid-19 comments
Real news has value SUBSCRIBE