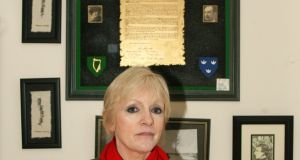 In a film shown in Belfast on Wednesday, Dolours Price said she regarded the killings of the Disappeared as a war crime. File photograph: Pacemaker

A new film screened in Belfast for the first time on Wednesday night provides a chilling account of how one of the Disappeared Jean McConville was abducted, shot dead and secretly buried by the IRA.

In the film “I, Dolours” the late Dolours Price detailed how she and two other IRA members were directly involved in the murder of the Belfast widowed mother of ten children at a beach in Co Louth in 1972.

Ms Price, who died from an overdose of prescription drugs in 2013, also told the producer of the film, Ed Moloney, how she was implicated in the killings of three other members of the Disappeared that same year. She agreed to the interview on the basis that it would not be released until after her death.

In the film, directed by Maurice Sweeney, Ms Price recounted how she was a member of a secret unit of the IRA called the Unknowns which was run by the late Pat McClure who reported back to the former Sinn Féin president, Gerry Adams who has stated he was never in the IRA. Mr Adams has strenuously denied he was in any way involved in the murder of Ms McConville.

Previously, Ms Price had admitted she was involved in transporting Ms McConville across the border but in the film she detailed how she participated in the actual murder.

Ms Price said Ms McConville was abducted because she was allegedly acting as an informer - a claim that her family has emphatically denied, with former Police Ombudsman Baroness Nuala O’Loan supporting that assertion.

She said the IRA in Dundalk were to kill her but they refused because, Ms Price believed, she was a woman. So she and Mr McClure and an unidentified third member of the Unknowns went back across the border to kill her.

Ms Price said Ms McConville was taken to a grave dug by the Dundalk IRA and “shot in the back of the head by one of the volunteers”. She did not disclose who fired the fatal shot but said that in order to share the responsibility the two other IRA members “each fired a shot so that no one would say that they for certain had been the person to kill her”.

Notwithstanding Ms Price’s statement when Ms McConville’s body was found in 2003 it was discovered she was killed by a single shot to the back of the head.

In the film, Mr Moloney asked Ms Price did the Disappeared “haunt” her. “Yes,” she replied. “I think back on those who I had responsibility for driving away. I’m not a deeply religious person, but I would say a prayer for them.”

In the film, Ms Price also said that in 1972 she was involved in the transportation of Seamus Wright and Kevin McKee across the border, and also of Joe Lynskey. All three were killed and secretly buried by the IRA.

A press screening of “I, Dolours” was shown in Belfast on Wednesday. It was shown in April at the Hot Docs festival in Toronto, It will be shown by the Belfast Film Festival on August 13th and will be released on August 31st.