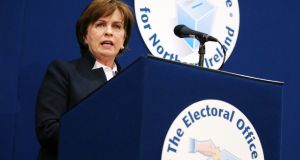 Diane Dodds: “Significant cause for concern from both businesses and consumers.” Photograph: Jonathan Porter/PressEye

The North’s Minister for the Economy has written to the UK government calling for “urgent action” to safeguard deliveries from Great Britain to Northern Ireland which have been suspended due to the end of the Brexit transition period.

A number of retailers have suspended parcel deliveries to the North from Britain and some firms particularly in the agri-food sector – have halted sales to Northern Ireland due to concerns over additional paperwork and checks.

Diane Dodds said there was “significant cause for concern from both businesses and consumers” and placed Northern Ireland in a “much worse position compared to GB consumers.” The UK government must provide “long-term solutions,” she said.

Under the terms of the Northern Ireland protocol, which came into force at 11pm on Thursday, the North remains part of the EU single market for goods and must apply EU customs rules at its ports and airports.

Customs declarations are now required for goods arriving in Northern Ireland from Great Britain and agri-food products must be checked at border control posts, though some “grace periods” have been agreed to ease the transition.

The UK’s Customs and Revenue has adopted a “temporary approach” on parcels until March 31st, during which only businesses receiving deliveries of goods worth £135 or more from Britain will be required to fill out a customs declaration. It is not clear what will happen from April 1st.

Amazon has warned that some items may be unavailable for delivery to Northern Ireland, and some deliveries may take “slightly longer than usual” due to the additional requirements.

In her letter, the Minister, Diane Dodds, said that in recent weeks “numerous GB-based retailers” had withdrawn from offering deliveries to Northern Ireland.

“On regulatory issues we have seen retailers of plants, food and drink ceasing to offer products for delivery in Northern Ireland due to increased costs,” she said.

Ms Dodds said the UK government must “urgently engage” with retailers and marketplaces to have deliveries to Northern Ireland reinstated, as well as “address the regulatory barriers which have caused delivery for some products to be halted.”

She also said London must “put together a plan now to ensure that the end of the grace period does not cause retailers and marketplaces to withdraw from this market.”

Meanwhile, the volume of freight arriving at Northern Ireland’s ports has remained low following the holiday period and stockpiling by firms before the end of the transition period.

Border control posts – where products of animal and plant origin arriving into Northern Ireland from Great Britain are checked – have been in operation since Friday.

A few lorries arriving into Belfast from Scotland were delayed because of incorrect paperwork, but the new processes will not be fully tested until normal volumes of freight resume.

The Department of Agriculture said a “pragmatic” approach would be applied in the first week, with the “expectation from that point . . . that businesses must arrive at point of entry having completed all the necessary paperwork and notifications.”