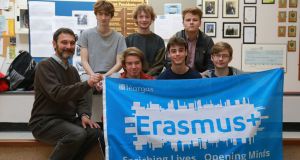 In 2015 the school introduced the Sek-1 curriculum, where maths, biology, science, history and German are taught through a German-language curriculum

Medium of instruction German and English

Subject options The school has a wide range of subject options but is particularly innovative in how it incorporates German language into its assessment options. With the bilingual Leaving Cert, students sit an extended German language and literature paper and a section of European history through German. This satisfies the language proficiency requirement to study at a university in Germany. All students take the Sprachdiplom exams, which confer the same language requirements to study in Germany. In 2015 the school introduced the Sek-1 curriculum, where maths, biology, science, history and German are taught through a German-language curriculum. With the French school Lycée Français d’Irlande sharing the same campus as the Deutsche Schule, some of the classes are held together (through English), increasing the cultural diversity and European vision that students encounter day to day.

Interesting fact: Past pupils have often gone on to international careers. Perhaps the best-known past pupil of recent times is the multi-award-winning journalist Sally Hayden, who has worked with CNN, Time, BBC, the Washington Post, the Guardian, Channel 4 News, Al Jazeera, the Times of India, National Geographic and many more. She currently reports from Africa for The Irish Times and recently delivered a (virtual) talk to the school’s current pupils.

In one of the highest-profile fallouts from this year’s calculated grades process, St Kilian’s, which specialises in German teaching, was disappointed when only 14 per cent of its students achieved a H1 in German. Based on past performance, the school expected half of its students to secure top marks.

The case ended up in court, where school principal Alice Lynch – who in 2012 became the first non-German to be appointed to the position – presented evidence that the State’s standardised grades model produced “inexplicable” results.

“They learn more than how to order a meal or buy a ticket in German,” says Lynch. “They become comfortable with German literature and natural conversation.”

According to last year’s Irish Times feeder school list, 100 per cent of the class of 2019 went on to third level, although this figure includes students who may have deferred for a year or more, perhaps having travelled overseas.

St Kilian’s, which takes its name from the Irish missionary bishop who ministered in present-day north Bavaria at the end of the seventh century and promoted early educational links between Ireland and Germany, has always looked outwards to Europe, and runs an innovative human rights module in transition year that focuses on freedom of speech, political freedom and migrants. It has won several Concern debate trophies.

Because of their German-language proficiency, graduates of the school have more study and work abroad options – or did at least until Covid-19 forced so many changes on our lives.

“A few years ago, our students won third prize in a green-schools competition, where they presented to industrialists in Germany,” says Lynch. “We partnered with a German school in the Hague for a project on coastal communities and travelled to present to each other. The German soccer team came to visit us shortly after winning the 2014 World Cup. Every other year, we’ve taken part in the European games at our sister school in Brussels, and they play Gaelic and hurling when they come here. We do three-week work experience exchanges in Hamburg. All of these have had to be cancelled because of Covid, so we’ve moved a lot online.”

The school has no uniform and attracts parents who want a bilingual education for their children. “German and French parents are not used to paying fees,” says Lynch. “”We have a lot of children from mixed German and Irish backgrounds, and if you ask them if they’re German or Irish, they’ll say Irish. But typically they all have a strong connection to Germany, perhaps through a parent or grandparent.”