Feeder schools: Do they help or harm education? 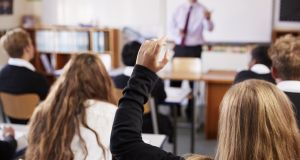 Parents and guardians should keep other factors in mind besides academic achievement when choosing a school for their child. Photograph: iStock

Critics of feeder school data contend that there is so much more to a school than the metric of third-level progression alone.

And they’re right: teaching and learning, ethos and values, school size and gender mix, subject choice, health and wellbeing, student voice and extracurricular activities are equally important – if not more so – than a school’s academic record.

We do not pretend that academia is the only metric of value: we are also providing significant contextual information – elsewhere in this coverage we delve further into the other factors that parents and guardians should keep in mind when choosing a school for their child.

Ultimately, however, Ireland’s school system doesn’t measure or credit a student’s holistic experience. Instead, it dictates their third-level opportunities based on a single set of high-pressure exams with a solely academic focus – and this is what these tables capture. The Government has better, more concrete data but legislation prohibits its publication.

The interest in the annual feeder schools coverage indicates that parents are very keen for information on schools. This year, in particular, our data will show whether calculated grades and grade inflation had an impact on third-level progression rates for all school types, making it an important contribution to the policy debate.

Our coverage has also consistently highlighted the social inequality that leads to schools in one neighbourhood sending 100 per cent of students to third-level while a school in another neighbourhood has a progression rate of as low as 20 per cent.

In a disadvantaged area, a family may have lower levels of education across multiple generations and less of a tradition of going on to third-level. Children may have more caring responsibilities for younger siblings, parents or relatives, and there is a correlation between lower levels of income and higher rates of disability, learning difficulties or health problems.

Parents or guardians can also find it harder to invest time and energy in their child’s education if they’re in a substandard house, working several jobs and more focused on the day-to-day stresses of keeping their child warm and fed than a more comfortable, middle-class family.

In this context, a school in a disadvantaged area that manages to send as much as 60 per cent of its students on to third-level may be relatively “better” than a school in a wealthier area with abundant resources and highly engaged parents with a 90 per cent progression rate.

There is no perfect argument for or against feeder school tables but, on balance, as journalists, we believe that some data is better than none and it is right that we publish contextual information – albeit imperfect information – that can help parents gain a better understanding of one aspect of the school system. It’s not tenable to suggest that academic performance should be ignored or that newspapers should suppress the publication of information based on freely available data.

Feeder schools are here to stay; railing against them in any form is pointless. Instead, we should focus on how we can make them better.

Rachel Dodge, a researcher at Cardiff Metropolitan University, wrote on theconversation.com that where there are many arguments against the measuring of school leagues tables, “they are here to stay” and could be more worthwhile if they included a measure that indicated wellbeing.

David Reynolds, emeritus professor of education at Swansea University, says that league tables are not necessarily a tool of the political right or conservatism. “It is not right wing to ensure children can read. A left-wing and radical idea is that we can run great schools.”

Emer Smyth, head of the social research division at the Economic and Social Research Institute, says that the tables are misleading and have no positive impact on Irish education, suggesting that a better approach would look at test scores in junior cycle and compare them to progress at Leaving Cert level. As things stand, however, junior cycle results data is not made available by the State.

“We don’t like the feeder school lists that come out every year because they only reflect the academic aspect of a school – and it’s not the most important aspect.

“What do parents look for in a school? That their child will be happy and healthy. That they will be supported in all aspects of their personalities, talents and skills.

“Most parents speak to other parents in the school they look to and glean their information through that. They may look at the league tables for the academic perspective but we don’t think it’s the most important factor for them.

“By and large, parents tend to send their child to the local school in the local area. Most schools and teachers work hard and serve pupils well. Of course there can be difficulties that pertain to school leadership but overall they work very hard. “Most schools are transparent and the student-parent charter, currently working its way through the Dáil, is definitely going to bolster transparency and the relationships between schools and parents.”

The teacher view: Ann Piggott, president of the Association of Secondary Teachers in Ireland (ASTI)

“The question for me is this: do these tables contribute to a more equal society for our young people? In the UK, there is abundant evidence that league tables – which have been published by newspapers since the early 1990s – favour schools that are already advantaged.

“League tables do not capture the hugely relational nature of teaching and the emotional energy that goes into it. League tables discard the challenges faced (and often overcome) by young people as they navigate their way through the teenage years. League tables ignore the fact that a good school will have its own goals and objectives, based on the needs of each of its students. League tables say nothing about the resources available to teachers and the impact of large class sizes on teaching and learning.

“League tables should come with a warning: not everything that matters can be measured.

“This is not to say that schools cannot be accountable. In Ireland, second-level schools are subject to a range of accountability mechanisms. These include: boards of management (which include parent and community representatives); an array of rigorous inspection processes, the findings of which are published on the internet; and numerous legislative acts (for example, the Education Act, Education Welfare Act, Equal Status Act) which set out the statutory obligations of schools. As workplaces, schools are highly open and transparent.”