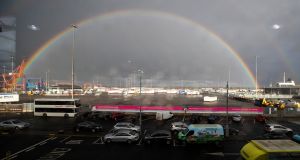 A rainbow forms over Dublin Port on Monday afternoon. ‘Vaccines are very much something that we will ensure will move speedily through,’ said Tom Talbot, head of customs operations for the Revenue Commissioners at Dublin Port. Photograph: Colin Keegan/Collins

State officials will fast-track any Covid-19 vaccines passing through ports and airports quickly should there be any delays from post-Brexit border controls over the coming weeks.

Delays from new customs, regulatory and agricultural checks are expected at Dublin Port as freight volumes increase over the coming weeks after the quiet New Year period, but State agencies will operate protocols fast-tracking the transit of essential supplies such as vaccines.

“We keep a very close eye on them and make sure they move very quickly,” Tom Talbot, the head of customs operations for the Revenue Commissioners at Dublin Port, told The Irish Times.

State officials at the port would follow the same expedited procedures for the vaccines that were used for the supply of personal protective equipment (PPE) last year.

“We very much have that in play and vaccines are very much something that we will ensure will move speedily through,” he said.

The Revenue reported “a slow and steady build-up” of freight movements to and from Britain on the first business day back after the low volumes over the traditionally quiet new year.

Mr Talbot told a press briefing at the port that there will be delays but State agencies had been preparing “to minimise those delays and to move things through the port as quickly as possible”.

There have only been minor delays so far due to incorrect paperwork, the briefing was told.

Customs officials and inspectors from the Revenue, the Department of Agriculture and the HSE are working 24 hours a day, seven days a week to ensure the smooth passage of goods to and from Britain through new customs declarations, and health and regulatory checks.

The early part of January was a “bedding-down” period for traders and businesses as they get accustomed to the new border controls on the large volume of trade with Britain, and Revenue was updating its guidance every day as new procedures were being tested, said Mr Talbot.

“This is new to everybody and it will take time to bed in,” he said.

Freight volumes moving through the port were still low, and traffic and the procedures being followed were being “constantly monitored”.

Revenue has urged hauliers to ensure pre-boarding notification numbers required to board ferries reflect their consignments on board and to check their “customs channel” 30 minutes before docking to know if they are green-routed to exit the port or red-routed to checks after arriving.

Mr Talbot said drivers could check the channel in a few seconds on the Revenue’s website.

Hazel Sheridan, head of the Department of Agriculture’s import control division, said that importers of food and other products of animal and plant origin could submit paperwork “a bit sooner” and be “a bit clearer” filling out the paperwork to avoid any consignments being rejected.

She said the requirement to provide 24 hours’ notice on these consignments, which food importers have said is delaying deliveries, was needed to allow documents to be completed and for consignments to be signed off by veterinary and plant inspectors before being shipped.

“We will keep our processes under review,” she said.