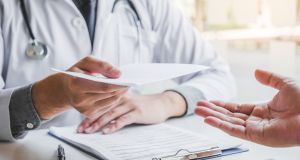 Public health specialists, who have played a key role in dealing with the Covid-19 pandemic, have started balloting for strike action over pay. Image: iStock.

Any proposals for upgraded contracts with higher salaries for public health specialists will have be considered in the context of wider public service pay policy, the Department of Public Expenditure has said.

The comments came as public health specialists, who play a key role in dealing with the Covid-19 pandemic, began balloting for strike action over pay.

The department also said that while the Government had considered changes to existing legislation, which would effectively get around existing restictions on public service pay rises and facilitate talks on new contracts for specialist doctors, no date had yet been set for this to be introduced.

Public health specialists, who are represented by the Irish Medical Organisation (IMO), have been campaigning for some time for the field to become a consultant-led service and for specialists to be awarded consultant contracts “to reflect their expertise”.

Minister for Health Stephen Donnelly has said he is committed to establishing a consultant-led public health model.

The Department of Health and the HSE are currently drawing up a business case for consultant posts in public health, which is expected to be submitted to the Department of Public Expenditure in the coming days.

However, the Department of Public Expenditure on Monday appeared to signal an unease with a standalone initiative for public health doctors. It is currently engaged in preliminary talks with the broader public service trade union movement on the potential for a successor to the current pay accord, which is scheduled to expire at the end of the year.

The public health doctors are concerned that Government proposals may not see all existing specialists automatically upgraded to consultant positions and instead having to compete for posts as they came on stream.

The IMO said it had received no proposals from the Department of Health and the current talks process on reforms of the public health medicine system had broken down.

“It is clear to us that Government are not prepared to deal with this matter in an equitable way thus forcing doctors to this position where the very future of our specialty is at stake,” it said.

“Consultant status and contracts are essential if public health medicine as a specialty in this country is going to survive and improve. It is essential to both the recruitment and retention of our highly qualified public health doctors.”

The Department of Public Expenditure said in a statement: “The Government has considered amendments to existing legislation that will enable progress on the implementation of the Sláintecare Consultant Contract. This legislative reform is being advanced by the Department in conjunction with the Office of the Attorney General.