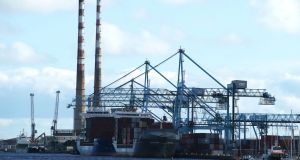 Concerns have been raised about ‘the whole traffic management’ in the port and how State authorities were only now testing how the traffic would flow through the system less than 50 days until the end of the transition period when post-Brexit border checks come into effect. Photograph: Stephen Collins/Collins

Niclas Martensson, chief executive of Swedish shipping company Stena Line, said border checkpoints close to its terminal at the port are “in the wrong place” and could lead to congestion from cars and lorries disembarking its ferries arriving four times a day from Holyhead.

He raised concerns about “the whole traffic management” in the port and how State authorities were only now testing how the traffic would flow through the system less than 50 days until the end of the transition period when post-Brexit border checks come into effect.

“We are very concerned over how that has been handled where we see that the facilities are placed in the wrong place and we have said it for 24 months but nothing has happened,” he told The Irish Times.

Border checks will come into effect, regardless of ongoing EU-UK talks to find a trade deal.

‘Running out of time’

As a crucial week of talks begins, Minister for Foreign Affairs Simon Coveney said on Monday: “We’re running out of time. We have to get a deal this week.”

Dublin Port’s management has asked shipping companies to space out the eight ferries from Holyhead to three-hour intervals to avoid delays after Brexit comes into effect on January 1st.

“The problem potentially is that we cannot turn the ships in time and the timetable is set by our customers and the production industry both in Ireland and the UK. I don’t see that we should change timetable because there is a lack of planning in the Port of Dublin,” said Mr Martensson.

He said that it was a “worry” for the company that it might have to reduce the number of freight units on board its ferries in response to congestion at the country’s busiest port.

There are currently eight roll on/roll off ferry arrivals from Holyhead, four each daily with Stena and Irish Ferries arriving roughly around the same time.

Irish Ferries wants to stick with its existing schedule too, increasing the chances for congestion.

Dublin Port Company chief executive Eamonn O’Reilly said the port was “stuck by geography” and “physical constraints” meant this was the only place where checks could be built.

“Everybody is fearful of the additional checks but they are coming and they are completely outside our control. They might lead to congestion,” he said.

Mr O’Reilly said the port had asked for staggered arrivals to “flatten the demand curve” and reduce the risk of congestion by running ferries every three hours instead of two every six hours but he stressed that he was not trying to force this.

Mr Martensson, speaking ahead of the 25th anniversary of Stena’s Dublin-Holyhead route, called for greater clarity from governments, urging all sides not to “over-complicate things.”

He pointed to free-flowing Common Transit Convention arrangements across EU borders in Norway and Switzerland as examples that could be followed between Ireland and Britain.

Stena had increased capacity on Irish Sea routes by 30 per cent and its Ireland-France route by 17 per cent and could increase capacity further with larger ships and more frequent sailings.

The company hopes to redeploy its Horizon ferry, anchored off Holyhead, to its Rosslare-Cherbourg route from this weekend after seven crew members tested positive for Covid-19.