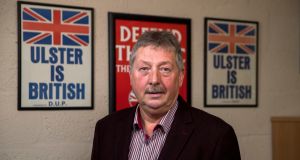 The hard border between Ireland and Northern Ireland during the Troubles only came about as a result of Republicans’ actions, DUP MP and Brexit spokesman Sammy Wilson has claimed.

Mr Wilson said “the only hard border we ever had in Northern Ireland was a hard border which resulted from the actions of Republicans”.

He made the comments after his party leader Arlene Foster claimed there had never been a hard border between the Republic and Northern Ireland.

Speaking on RTÉ’s Morning Ireland, Mr Wilson said Republicans “were the ones who caused army checkpoints to be put in place, army patrols, watch towers.”

“I think it’s significant and I think the point she [ARLENE FOSTER]was trying to make was that even with all of that infrastructure in place, there was still not a hard border,” he said. “You could not stop the illegal movement of goods across the border and I think that’s what Arlene Foster was referring to.”

Tens of thousands of British army troops failed to secure a hard border, he said, questioning “how on earth” the European Union would be able to do so in the event of a no-deal Brexit.

Ms Foster had said there was no need for a backstop - the name given to the legal guarantee that in the event of Britain leaving the EU without a deal - and that there would be no return to a hard border in Ireland. The backstop has been a major point of contention, with hardline Brexiteers and the DUP opposing the clause.

When challenged by a journalist that during the Troubles there was routine checks along border crossings, Ms Foster said: “I think you’ll accept it was for reasons of security and even then terrorists were able to come and go at their pleasure.”

The DUP and a large number of Conservative MPs in the House of Commons voted against Theresa May’s proposed Brexit deal on Tuesday as it was beaten by 432 votes to 202. Labour leader Jeremy Corbyn said his party would table a motion of no-confidence in the Government, which will be debated on Wednesday afternoon before a vote is held at 7pm.

However, DUP MPs, who are in a confidence and supply deal with the prime minister, and hardline Brexiteers who voted against the proposed deal are expected to support the government in the no-confidence vote.

Commenting on the fallout of Tuesday night’s vote, Mr Wilson said he did not think Mrs May could command enough support in parliament to extend the UK’s departure date from the EU, currently set for March 29th.

“A no deal Brexit will happen once we reach the 29th March, legally we will have left and if there’s no deal, then we have no deal. I don’t fear it,” Mr Wilson said.

Meanwhile, Tánaiste and Minister for Foreign Affairs Simon Coveney said the onus was on the British government to propose a viable alternative to the withdrawal agreement.

He told the same programme that the Government would not block any request from the UK for more time to come up with a Brexit deal, but there needs to be a plan for a “managed, controlled Brexit”.

“There’s still a lot to happen in Westminster before it becomes clear what the UK is looking for,” he said. “We need to hold our nerve.”

Mr Coveney added: “I don’t think the EU is any mood to agree changes to the withdrawal treaty. We will have to see what the UK is looking for. We don’t know what the British parliament will support. We need to focus on EU unity.”

He said he had contradicted Minister for Transport Shane Ross at a briefing in Government Buildings on Tuesday when his colleague said there would be Border checks in the event of a no-deal Brexit.

“If Britain leaves without a deal, well, then we obviously have to have difficult discussions with the European Commission and with the UK in terms of how we protect the EU single market,” Mr Coveney said after intervening while Mr Ross answered a question on the issue.

Speaking on Wednesday, he said: “The backstop will mean minimal checks, limited checks at sea. I just reminded Shane that is the position which we support.”