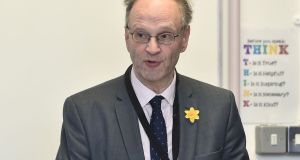 Minister for Education Peter Weir said previously that the time was not yet right to close schools. Photograph: Colm Lenaghan/ Pacemaker

A primary school in Northern Ireland with a suspected case of coronavirus in one of its pupils has been denied permission to close by the North’s Department of Education, the school’s principal has said.

The pupil at Ebrington Primary and Nursery School in Derry displayed no symptoms at school last week but became unwell over the weekend. The student has not been tested as tests are carried out in the North only when a patient is hospitalised.

In a letter to parents which was published on the school’s website, Brian Guthrie said he had applied to the department for two exceptional closure days on Thursday and Friday.

“I have been unsuccessful and these have been denied,” he wrote.

This, he said, was “a similar story to many other primary schools in our city who had applied for the same”.

“I totally understand and respect your decision to protect your children and families,” Mr Guthrie wrote. “You should, therefore, do what you feel is right for your own individual circumstances.”

The Irish Times approached the Department of Education for comment on Tuesday night.

The Minister for Education, the DUP MLA Peter Weir, previously said the time was not yet right to close schools. When that decision is made, he has said, it will be on the basis of medical and scientific advice.

An increasing number of schools in the North have decided to close until the end of the week to allow staff time to prepare for any future school closures.

In an open letter to the Minister of Education, the Catholic Principals’ Association called for schools to close and said parents had “already started making your decisions for you by keeping children at home”.

The First Minister and Deputy First Minister will on Wednesday chair a meeting of the Civil Contingencies Group (NI) to lead the response of the public sector to the coronavirus outbreak.

Ten new cases of coronavirus, also known as Covid-19, were diagnosed in Northern Ireland on Tuesday, bringing the total number of cases to 62.

Businesses in the North on Tuesday called for clarity and for financial support to prevent widespread job losses.

The chief executive of Hospitality Ulster, Colin Neill, called for clear instructions as to whether businesses in the hospitality industry in Northern Ireland should close, and for support for the up to 65,000 workers affected.

“I have had grown men in tears,” he told BBC Radio Foyle, “telling me they have no choice, that their businesses will go to the wall.”

Queen’s University Belfast, Ulster University and Belfast’s Lyric Theatre – which remained open throughout the Troubles – have announced that they would close to attempt to halt the spread of the virus.

Businesses in the North will not pay rates for the next three months, after the Minister of Finance, the Sinn Féin MLA Conor Murphy, announced £100 million of emergency funding last night.

The North can also expect to benefit from the £330 billion of emergency funding announced by the UK chancellor on Tuesday.