Stable government must be formed to deal with Covid-19 crisis, says Simon Harris 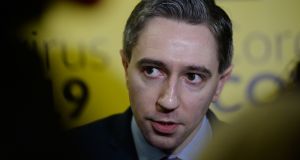 Simon Harris says it is right to resume talks and a choice will have to be made about the appropriate time to transition to a new government given the ongoing pandemic. Photograph: Alan Betson

Minister for Health Simon Harris has said that a stable government with a workable majority must be formed in order to deal with the coronavirus crisis and economic fallout.

Fine Gael and Fianna Fáil are due to resume government formation talks on Wednesday despite repeated calls from the Green Party to delay discussions.

The Green Party has called for a national unity government comprising the main parties and independents. On Monday, Green Party leader Eamon Ryan called for talks to be suspended and said a crisis government could instead see all parties and independents involved with a cabinet split proportionately. He said this was needed to tackle the growing challenge presented by Covid-19.

Mr Harris said that while a government must be formed to pass a budget capable of addressing the fallout over the Covid-19 crisis, he did not see how having multiple parties involved would give “greater clarity of thought”.

He said it was the right decision to resume talks and said a choice would have to be made about what the appropriate time was to transition to a new government given the ongoing pandemic.

“The longer this global pandemic goes on, the more intensively I am involved, the less partisan I become and the less time I have to consider partisan politics. I think the first thing to say is there is a Government and it is functioning and I hope the Irish people have seen that demonstrated in recent days.”

He said the election brought a fragmented result but the Constitution was clear that the Government and Ministers could continue with their work in the interim.

“There does obviously come a point when a new government has to be formed. It is going to require wiser heads than mine as to work out what that appropriate time is in terms of a suitable transition in the middle of a global pandemic.

“Ireland will need a government that can command a majority of the Dáil and get this through the Dáil well beyond just the public health space.

“While we are rightly and should be consumed with how we deal with the public health emergency that exists here, there will be a point in time where budgets to recover from this economically will have to be prepared.”

Mr Harris said the decision to resume talks on Wednesday was “the sensible thing to do”.

“I don’t think anybody should use this public health emergency as an opportunity to kind of demand that they must be in government.

“I am not actually sure how you can get greater clarity of thought by involving multiple parties in a national government. I don’t think this is going to be something short term. I think we are going to be dealing with the effects of Covid-19 from a public health point of view in all likelihood for many months and, potentially, the fallout of it in terms of our economy, well beyond that. So I think there will be a need for a stable government to be formed.”