Department of Health secretary general pay to rise by over €90,000

New pay rate of €292,000 set for vacant job to be filled by open competition 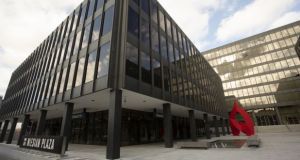 The Government has approved a pay rise of more than €90,000 for the position of secretary general of the Department of Health, making the person to be appointed to the role the highest-paid civil servant in the country.

The post, which is being advertised by open competition, is to attract a salary of €292,000 per annum.

Mr Watt is being paid his existing Department of Public Expenditure salary of €211,000 per year.

Up to now the secretary general post in the Department of Health has not been considered to be in the top tier.

However, on foot of the Government decision there will now be a fourth and more highly paid post as secretary general in the Department of Health, at least for the five -year duration of the term of the new post.

Up to now the post of secretary general of the Department of Health attracted a salary of just over €201,000.

However, while the person appointed as secretary general in the Department of Health will be the highest paid civil servant in the country, there are higher pay levels in place in parts of the broader public service.

It is understood that the new salary of €292,000 for the Department of Health post is being set at the level of governor of the Central Bank.

The Department of Public Expenditure said on Friday the role of secretary general of the Department of Health was a highly complex one with a very challenging brief, particularly so in the midst of a global pandemic.

“The role which will be filled through an open and competitive process, will require an individual with the ability, ambition and experience to take on this large portfolio with a department of almost 600 staff and 19 bodies under its aegis, including the HSE. The increased salary for this role for a five-year term, is deemed to be commensurate with the scale of the responsibilities, including the vaccine rollout in the immediate term and the challenges of implementing the Government’s ambition for the rollout of SláinteCare and the budget of €21 billion for Health.”

The Department of Public Expenditure said that the salaries for other secretary general positions in the Civil Service had not changed.