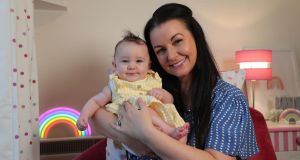 When asked how important donor milk was for her baby daughters, Bridget Coyle does not hesitate.

The girls, from Lucan in Dublin, were both born prematurely. Aoife, who is now three, was delivered by emergency Caesarian section at 27 weeks, and her one-year-old sister, Orlagh, was born at 30 weeks.

Aoife’s arrival was “very sudden”, explains Ms Coyle, who became “very sick” with preeclampsia and HELLP syndrome, a life-threatening liver disorder, and the only solution was to deliver her baby immediately.

“I was being looked after in the high-dependency unit when they came to talk to me and they mentioned the donor milk and the benefits it has to the baby,” she explains. “I had never heard of donor milk before.”

A total of 664 babies received donor breast milk from the human milk bank based at the South West Acute Hospital in Enniskillen, Co Fermanagh in 2019.

The only such facility on the island of Ireland, it provides vital supplies of milk for premature and sick babies, helping 437 babies in the State and 227 in Northern Ireland.

The service has continued operating throughout the pandemic, with 247 babies helped between March and the end of August. However, Covid-19 has put the milk bank under pressure, and it has appealed for more donors.

The human milk bank depends on breast milk donated by mothers of young babies, who express milk at home and then freeze it before dropping it off in batches at their local hospital. It is brought to Enniskillen by the voluntary Blood Bikers medical transport service. There it is checked, screened, and then sent back out to neonatal units.

“It is a medicine for babies,” explains Human Milk Bank co-ordinator Liz Bailie. “Human milk can’t be synthesised any other way and it helps babies fight viruses and bacteria, especially with an extremely premature baby with an immature brain and eyes, it helps those to develop because it protects the gut . . . and it also helps protect new babies from pneumonia.”

She added: “We even give it to wee cardiac surgery babies as well, and their survival rate is far better.”

The bank has also helped twins, triplets and one set of quads last year, as well as “mummies who have had breast cancer and can’t feed their babies”.

In Ms Coyle’s case, Aoife was about five days old before she was able to produce enough milk to feed her herself.

The donor milk “really took that pressure off”, she explains.

“I said I wanted to feed her myself but they said that would come in time, and in the meantime the milk was there for her.”

Their story inspired another donor. Ms Coyle says a friend of hers who had a baby around the same time “had excess milk and she donated some of her milk because she was touched by Aoife’s story”.

This is often how it works – mothers find out about the milk bank because of their own experience, or that of someone close to them, and donate to help others.

Louise Lennox, from Co Wicklow, was 30 weeks pregnant when she suffered a placental abruption. Her now seven-year-old son, Alex, was born by emergency Caesarian and spent the first part of his life in an incubator in intensive care.

“I expressed around the same hours he was fed so I had that sense of connection to him,” she explains, and while she had no difficulty expressing milk for her son, she remembers another mother who was “devastated” because she could not.

“She was crying, and she said, ‘I just want to help my baby, my baby’s sick, breast milk will help, and I just can’t, physically nothing’s happening’.

“I felt so sorry for her, and I said, do you want some of mine? I didn’t give it to her, but it was the automatic response of wanting to help another mother who was in the same situation who just wanted to do the best by her child.”

When her daughter Lottie-Bow was born last year, she knew immediately that she wanted to donate milk.

“After I feed her I pump at night-time for the babies in the neonatal intensive care unit . . . it’s for the mums and babies, I do it for them.

“I’ve seen these tiny, tiny babies, and I’ve seen the heartbreak it brings to parents, and everyone is sitting there very quietly by the little incubators and you see other parents upset, crying, some of the babies are on 50/50 life or death, and I know breast milk can help that journey have a better outcome.”

Others donate in memory of their own babies.

“We have mummies where the wee baby has passed away but they have a big stash of milk in the hospital and they want to donate it because they want their baby to help someone else,” says Ms Bailie.

Another mother whose baby had died “wanted the experience of being able to breastfeed a baby and that was her way of giving back . . . that’s what she wanted her baby to do for other wee babies”.

Ms Bailie has seen demand for donor milk increase during the pandemic, and she is concerned the virus has increased the levels of stress among mothers.

There have also been changes in the way the donation process works – donors must now keep expressed milk in their freezer for two weeks before dispatch, which has reduced the amount the milk bank receives.

Mothers were also “exhausted” and had no time to express with older children off school during lockdown, and initiatives which raise awareness about the milk bank among mothers, health visitors and midwives have been cancelled.

All of this contributed to a drop in supply, though Ms Bailie says that “thankfully, we managed to just about keep on top of it”. A recent appeal has meant “we’re actually getting back to having stock”, though because mothers can only donate until their babies are six months old, there is always a need for new donors.

One thing that will not affect supply is the fallout from Brexit. Though the milk bank operates on a cross-Border basis, “we were given assurances that because it’s medicinal there will be no problem if it’s going up or down or across a border,” says Ms Bailie.

“It’s a good system, it works for the whole of Ireland and it benefits so many babies, so you wouldn’t like anything to change.”

Ms Coyle agrees. Both of her daughters are doing “fantastic, they’re really hitting their milestones. Aoife is in preschool and you would never in a million years have thought she went through what she did.

“I would definitely encourage anyone who can donate to do so. With premature babies, their little bodies aren’t mature enough for the formula, and it wouldn’t give them the antibodies they need and the nourishment they get from breast milk. I always say, it was a lifesaver for both of them.”