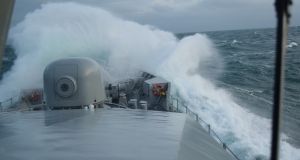 The Department of Defence has denied that a Naval Service patrol ship was involved in any Nato (North Atlantic Treaty Organisation) exercise or operation during a manoeuvre with a Spanish frigate in the Mediterranean earlier this week.

An exercise between Naval Service patrol ship LÉ James Joyce and a Spanish frigate Cristobal Colon prompted a tweet from the Spanish defence ministry with hashtag “We are NATO” last Monday.

The Department of Defence said the Cristobal Colon was providing support to “Operation Sophia”, the EU naval force mission in the Mediterranean, when it spent time with the LÉ James Joyce.

It confirmed that the Spanish frigate was transiting the Central Mediterranean en route to join up with the Nato-led “Operation Sea Guardian”.

The department said Operation Sophia, which is focused on disrupting human smuggling and trafficking networks in the southern Central Mediterranean, will avail of “transiting vessels” which States may “make available to the force commander for short periods of time”.

Non-governmental organisation Médecins Sans Frontiéres has reiterated its concern about Operation Sophia’s role in forcibly returning migrants from vessels at sea to Libyan detention centres, even as Tripoli experiences some of the worst fighting in years.

MSF has called for the immediate release and evacuation to safety of thousands of refugees, migrants and asylum seekers arbitrarily held in Libyan detention centres.

Since Ireland joined the EU’s Operation Sophia last year, the Naval Service’s focus has shifted from rescuing migrants in the Mediterranean to apprehending smugglers, and the EU operation also involves training and providing materials to the Libyan Coastguard.

“EU-supported Libyan coastguard vessels have intercepted unprecedented numbers of people on the Mediterranean Sea this year, only to return them to Libya, ”MSF said in a statement on Friday.

“ Throughout Libya, refugees and migrants face alarming levels of violence, extortion and exploitation, and many report the widespread criminal practice of kidnap for ransom,”it said.

Members of the Oireachtas Committee on Foreign Affairs, Trade and Defence recently expressed concern about Ireland’s change in focus in the Mediterranean.

Senator Alice Mary Higgins (Ind) told the committee on July 5th that “we have moved from a situation whereby our newspapers in Ireland celebrate and show the search and rescue operations and what our Naval Service has done - and I share the pride in our Naval Service that everyone has expressed - to one whereby we have flipped to concerns, worries and insinuations about operations”.

Naval Service ships had first been sent to the Mediterranean under a bilateral agreement with Italy from 2015 which focused on search and rescue of migrants.

The Department of Defence said that the Naval Service can be involved in surveillance and intelligence gathering, search and rescue and disposal of migrant boats and force protection operations, but it ships do not return migrants rescued to Libya. It said people rescued by Naval Service ships are brought to an Italian port.