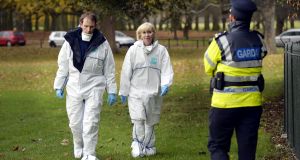 State Pathologist: Marie Cassidy (centre) is to retire after 14 years in the role. Photograph: Alan Betson

The State Pathologist, Marie Cassidy, is to retire after 14 years in the role.

Minister for Justice Charlie Flanagan paid tribute to Prof Cassidy’s “many years of dedicated service” and said the expertise provided by her office had “helped resolve many crimes and bring perpetrators to justice”.

Prof Cassidy, who has Irish heritage but was born in the Rutherglen suburb of Glasgow, in Scotland, came to Ireland in 1998 after being appointed deputy State pathologist. She soon became a familiar face on television reports from murder scenes around the country. Six years later she succeeded John Harbison, becoming Ireland’s first woman State Pathologist.

Prof Cassidy once said a sense of humour was essential in forensic pathology – a profession so grim, she said recently, that during a murder trial involving a sex worker in Glasgow, another sex worker told her, “Ach, I don’t know how you do that job, hen.”

She told The Irish Times in 2006: “At the end of the day it’s a job. Okay, it’s a rather unusual job, but it’s not something that troubles me. I don’t have sleepless nights, seeing all these horrible, ghastly images, because that doesn’t affect me at all, one iota. I mean, I doubt very much that there’s anything I haven’t seen at this stage – I’m 20 years in, I think I’ve seen most things – so that kind of thing doesn’t prey on my mind.”

But she said child deaths affected her. “When it comes to dealing with children, there is nothing in this world that makes that right. There’s no point in saying, ‘Well, it’s just one of those things.’ To the family this is the worst thing that can ever happen, and you can understand that, because we’ve all got children, and you do think, If something happened to my child, how would I ever cope? With children, you just look at them; you think, That could happen to my family.”

Scottish newspapers have speculated that she was the role model for the BBC TV series Silent Witness, in which Amanda Burton played the pathologist Prof Sam Ryan.

In recent years she has taken up adult ballet classes. It was a hobby she pursued as a child but was never good enough to become a professional.

She recently told a fundraising event for Ballet Ireland: “You have to have balance in your life. I see some terrible sights and I hear some terrible things, but you have got to walk away and divorce yourself from it. You need beauty and bright colours. You need anything that distracts you. That’s where ballet comes in for me. It is an hour getting away from it all.

“Every Wednesday I put on my ballet shoes and dance. For at least an hour a week I get to dream. I may be more a dying swan than a sugar-plum fairy. There is a motley crew of women there, and some of them take it very seriously. For that hour the swans, the cygnets and the ducklings all get together, and we all think we are prima ballerinas and we are happy.”

Mr Flanagan said she done valuable work for the Irish people. “I know that she will be greatly missed not just by her colleagues in the Office of the State Pathologist but by all those who work with her in the criminal justice system.”