Department in talks with mink farms over plan to cull 120,000 animals 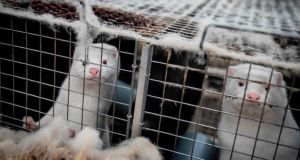 Mink look out from their cage at a farm in Denmark where a cull has also been ordered. Photograph: Mads Claus Rasmussen/Ritzau Scanpix/AFP via Getty Images

Talks are under way between the Department of Agriculture and the State’s three remaining mink farms, following a recommendation by the chief medical officer, Dr Tony Holohan, that all minks should be culled.

The proposed cull “as a matter of urgency” of the 120,000 Irish-farmed animals follows Covid-19 outbreaks on farms in Denmark, Greece, Netherlands, Spain, Sweden and Italy, as well the US.

There are concerns that mink could pass a mutated strain of coronavirus back to humans and affect the success of efforts to vaccinate the population during the course of next year.

The Department of Agriculture noted the Department of Health’s recommendation that continued mink farming raises the risk of mutated Covid-19 strains, and that mink should be culled to minimise, or eliminate this risk.

However, the former did not commit to issuing such an order to the three farms in counties Laois, Kerry and Donegal, saying it “continues to engage with the mink farmers to consider the next steps”.

“Mink farmers continue to operate in full compliance with all legislative and animal welfare requirements and have co-operated fully with these efforts. Testing of the mink herd in Ireland detected no positive results to Covid-19 to date.”

Independent TD Michael Fitzmaurice called for the 33,000 wild mink to be included in the proposed cull.

“If a cull is to take place on the three mink farms in Ireland, then we must take the opportunity to eradicate the mink in the wild. They are a scourge on the countryside, particularly when it comes to lambs and native birds,” he said.

The culling call by Dr Holohan was welcomed by the anti-fur campaign group, Peta, which described fur farming as “a business that shames us with its cruelty”.

“Fur fell out of fashion long ago, when people learned that animals are drowned, electrocuted, and sometimes even skinned alive,” said Peta director Elisa Allen.

“It’s because fur farms are packed with sick, stressed, suffering animals that they have now been identified as Sars-CoV-2 hotspots responsible for a mutation of the virus that threatens the efficacy of any vaccine,” she went on.

Speaking on RTÉ, Dr Gerald Barry of University College Dublin’s School of Veterinary Medicine was surprised by the culling recommendation, saying the mutations seen in mink had already been seen in humans.

Such reservoirs could make it far more challenging to eradicate the Covid-19 virus. Smallpox, for example, was eradicated partly because it did not find a footing among animals capable of returning it to the human population.

Rise TD Paul Murphy said the “mutant Covid strain in Danish mink farms shows real dangers here too”. It was he said “time to fast-track [the] promise to shut the farms now, before they become hotspots.”

Mink and other fur farming stopped in England and Wales in 2000, and in Scotland and Northern Ireland two years later. There is a commitment in the programme for government to phase out mink farming in Ireland.