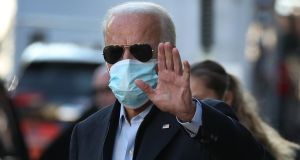 Major human rights bodies across the island of Ireland and in Britain have jointly warned US president-elect Joe Biden of the dangers posed by the United Kingdom’s departure from the European Union to the Belfast Agreement.

Fifteen leading advocates prepared a briefing paper for Mr Biden highlighting the threat to rights protections which they said go to the core of the agreement, also known as the Good Friday agreement, and which remain under threat.

The group – which includes Amnesty International, ICTU, the Centre for Cross Border Studies and the Equality Coalition – previously alerted the speaker of the US House of Representatives Nancy Pelosi about their concerns.

While debate has so far been dominated by trade issues, the group said other issues are of concern, too, including preventing a return of the human rights breaches that “scarred Northern Ireland’s past”.

Brexit threatens the rights and equality clauses in the Belfast Agreement, “because European law has long been a critically important support for such rights.

“We fought hard for a provision in the EU-UK Withdrawal Agreement (in the Protocol on Ireland and Northern Ireland) which guaranteed there would be no diminution of such rights as a result of Brexit” the groups said.

The Biden paper highlights a number of threats, including the Internal Market Bill currently before Westminster and doubts about the UK’s future membership of the European Convention on Human Rights.

In addition, the UK Government’s lack of commitment to guaranteeing labour, anti-discrimination and environmental rights in Northern Ireland equal those enjoyed during the UK’s EU membership is also a concern.

Saying they would be grateful for president-elect Biden’s continued support, they urge his transition team where possible to hold detailed discussions with British and Irish representatives.