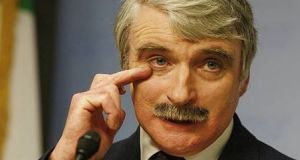 Fianna Fáil’s Willie O’Dea: he said it was “not right and proper that one category of people” should be “singled out for punishment”. Photograph: Getty Images

New rules stripping those on unemployment assistance of their payments because they leave the State could be vulnerable to legal challenge, civil liberties and legal experts have said.

Speaking after it emerged that 104 people have had their pandemic unemployment payment (PUP) cut after foreign travel, Irish Council for Civil Liberties executive director Liam Herrick said the legal mechanism giving effect to the measure had a “fatal weakness” in it.

He said the statutory instrument, enacted by Minister for Social Protection Heather Humphreys earlier this month, in turn relied on travel advice issued by the Department of Foreign Affairs which is not legally-binding. “It seems to be grounded on, or give legal status to, something that isn’t the law, which is the travel advice.”

He said the rules had several weaknesses in his view, which gave rise to the question of whether the Minister was acting within the law.

Barrister William Quill echoed the Irish Council for Civil Liberties view, saying the advisory from the Department of Foreign Affairs “has no legal basis…it would be open to legal challenge [by] someone affected, someone who had their payments removed from them during that period because of having gone on holiday.”

Mr Quill also said a case could be made that the Government did not widely publicise the changes when they were introduced on July 10th. This could weaken the enforcement of the rule as people would have formed a reasonable expectation that they could travel within the normal application of the rules, which usually permit a two-week holiday for those on welfare payments without interruption to the payment.

The cancellation of the payments also raised questions over how the information on those travelling was gathered, seemingly by gardaí and welfare officials working in ports and airports.

Gardaí can demand a name and address if they have reasonable suspicion you have committed a road traffic or public order offence, but sources suggested most people stopped at airports had simply been requested to give their names, addresses and PPS numbers, and had complied – perhaps unaware that they had a choice.

Government TDs have raised concerns over the issues. Fianna Fáil’s Cormac Devlin said he had asked Ms Humphreys to detail arrangements involving the transfer of passenger data to her department.

His party colleague Willie O’Dea said it was “not right and proper that one category of people” should be “singled out for punishment”.

Rise TD Paul Murphy and his People Before Profit colleague Richard Boyd-Barrett have requested time to raise the issue in the Dáil today (Tuesday).

Mr Murphy said a debate and vote was needed on what he described as “discrimination” against those on the payments.

“If the Government fails to read the public mood on this they will be repeating the mistake they made last week on the €16,000 for the super-junior minister,” he said.