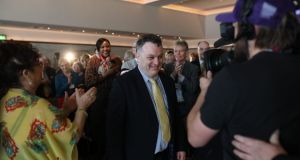 At the Alliance party conference’s annual conference at the Stormont Hotel on Saturday there was no escaping the viral topic of the day.

Press officer Scott Jamison had to put out a notice that party leader Naomi Long would not be attending “after being diagnosed with a severe chest infection and being instructed to remain housebound under doctor’s orders”.

With all these concerns about who was in contact with whom, he offered assurance that she did not have the coronavirus.

It must have been a double pain for Long to be watching from her sick bed as the keynote speech was delivered instead by party leader and MP for North Down, Stephen Farry.

After all this was the party’s golden anniversary annual conference. Some of the trailblazers who were about for the foundation of Alliance in April 1970 such as Jim and Maire Hendron, Robin Glendinning and Denis Loretto were at the conference, quietly delighted with the standing of the party they started.

It was a day for its leader to bask in the limelight, to take the kudos, to enjoy the popularity - because as Long well knows her profession can be a fickle business - and to urge members to achieve greater successes.

But it wasn’t to be. Farry did a decent job but even he would admit he doesn’t carry the energy and charisma of Long. She was missed.

Nonetheless, the Alliance delegates had a glow about them. For years, apart from a couple of brief periods when it seemed the centre-ground might flourish, the party vote was stuck on about 8 per cent.

But last year it broke out and saw its vote surge to 17 per cent in local, European and Westminster elections with Long elected to Europe, Farry taking North Down and a raft of new councillors coming on board.

Alliance, running with the zeitgeist, had captured a fairly strong mood for change and engineered a little shift away from the old unionist and nationalist certainties. That also was reflected in the recent University of Liverpool survey which found that 18.6 per cent of the December general election Alliance vote came from DUP voters and 11.6 per cent from Sinn Féin voters.

Some of the new vigour of Alliance also was evident in a strong speech from Sorcha Eastwood, who in the December election put some pressure on the previously unassailable Jeffrey Donaldson in Lagan Valley.

In this context it was absolutely fair for Farry to state that the party had shattered the “old canard” of a vote for Alliance being a wasted vote. And his added comment that “we have proven that we can win anywhere in Northern Ireland and we have drawn votes from right across the community” also was on the mark, though there are still a few pockets where it would be difficult for the party to penetrate.

Farry told delegates how Alliance still kept faith with Europe; how Boris Johnson “for now” was pursuing a “reckless hard Brexit”; how Alliance wanted reform at Stormont; how the British government must provide the finance to allow the Northern Executive to succeed; how Alliance’s justice minister and leader, the unfortunately absent Long, would crack down on the paramilitaries and organised crime.

He was also generous about Tánaiste Simon Coveney’s work in helping restore Stormont, comments which were warmly and spontaneously applauded by the conference.

There were no great headlines from the day but there could have been. Farry’s speech sent to the press had the line that Alliance didn’t “believe that there is currently the case for a border”.

Now here was an unusual incidence of Alliance radically shifting from its normal centre-ground position. But before we could say “hold the front page” the aforementioned Jamison was over frantically explaining that there had been a typo, and what Alliance didn’t believe was that there was “currently a case for Border poll”.

All in all, while there was an element of Hamlet without the prince, it was a big day for the party. Alliance, unlike its leader, was in the rudest of good health, brimming with confidence and looking forward to the future.