Pair among several men held after 10 people found being trafficked near Ghent, Belgium 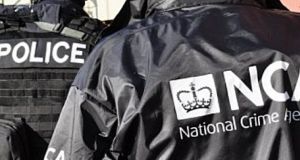 The National Crime Agency said it is ‘determined to do all we can to disrupt and dismantle criminal networks involved in illegal immigration’.

Two Irish men have been charged in connection with an alleged attempt to traffic children into the UK, according to Britain’s National Crime Agency (NCA).

Wayne Sherlock (39) is from the Eythorne area of Dover and Eoin Nowlan (48) is from Sandwich, also near Dover. Both are Irish nationals and were charged with “conspiracy to facilitate illegal immigration”.

They were remanded in custody at a hearing at Canterbury Magistrates court.

The pair were among a number of men arrested after officers found 10 people being trafficked in a lorry carrying a load of tyres near Ghent in Belgium on Thursday.

Wayne Sherlock and Eoin Nowlan were charged this morning with conspiracy to facilitate illegal immigration. https://t.co/yvlotizmmL

The migrants, believed to be two adults and eight children, are thought to be from southeast Asia.

The lorry driver, a 64-year-old man from Glasgow, who was arrested in Belgium has been also been remanded in custody. A 30-year-old man arrested in Co Antrim on Friday in connection with the same investigation has been released on bail.

The Belgian authorities intercepted the truck following a tip-off from the NCA.

Search operations in NI and England

Properties in Northern Ireland and England were also searched, with officers seizing two suspected firearms at an address in Kent.

“Our close working with our Belgian partners in this instance has led to the safeguarding of a number of migrants who had been put in a very dangerous situation. And we are grateful for their support,” said NCA regional head of investigation Gerry McLean.

“Working with partners at home and abroad, we are determined to do all we can to disrupt and dismantle criminal networks involved in illegal immigration and our investigation into this matter continues.”

West Flanders prosecutor Frank Demeester added that “this kind of human smuggling is very dangerous. And the operation proves once more that international co-operation works in the fight against this type of organised crime.”