Paul Keogh says private sector would ‘take your hand off’ for similar offer of 4.1% 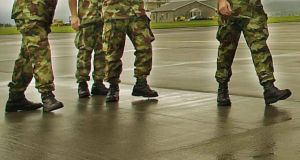 Military service allowance, paid to virtually all ranks, is to be raised by 10 per cent.

A €10 million package aimed at trying to stem departures from the Defence Forces will lead to tangible increases in earnings but recruitment and retention challenges will continue, Minister of State for Defence Paul Kehoe has said.

The Cabinet agreed on Thursday to increase a number of allowances for members of the Army, Naval Service and Air Corps on foot of recommendations of the Public Service Pay Commission.

Military service allowance, paid to virtually all ranks, is to be raised by 10 per cent. Cuts imposed to other allowances under the 2013 Haddington Road public service accord are also to be reversed. In addition, the Government is also to pay more to some categories of personnel based on findings of various outstanding pay adjudications.

An allowance for members of the elite Army Ranger Winger is to increase by €50 per week to €200 while cooks with relevant qualifications will receive an increase in technical pay of nearly €14 to just over €40 per week.

Some of these adjudication findings date back a number of years and the Government is to enter talks with the representative body for enlisted personnel, PDForra, on potential retrospection in an attempt to end current legal action on the issue.

In another development, the Government said recruits and apprentices would no longer be charged for rations and accommodation, which would save them €43.63 per week.

The Minister said he had had “his ass kicked” over weekend duty allowance which saw military personnel receive only about €20. He said this would no longer be the case.

Mr Kehoe said he believed pay of €28,000 plus extras was attractive for a school leaver who might or might not have a Leaving Cert.

Minister for Public Expenditure Paschal Donohoe said the Government had a clear respect and appreciation for the work of the Defence Forces and the new measures were a proportionate response to issues identified in the commission’s report.

It said the Defence Forces were experiencing retention challenges and that more than 60 per cent of enlisted personnel and non-commissioned officers said they intended to leave within the next two years.

The report said that both management and representative bodies had agreed that problems in the Air Corps were acute to a point that, due to the departure of pilots, the provision of essential services was “in jeopardy”.

The report said that the military air traffic control system at the main Air Corp base at Baldonnell in Dublin had to be downgraded to a flight information service as a result of staff shortages. The Government is to reinstate a loyalty bonus scheme for pilots which could be worth up to €20,000 annually.

Mr Donohoe defended restrictions on the terms of reference of the commission, which precluded it from commenting on core pay. He said pay was dealt with as part of the overall public service agreement.

Mr Kehoe said the Government had agreed an action plan and timeline for addressing recruitment and retention issues in the Defence Forces.

He said the report would not “sit on a shelf” in his department, which would work with military management to try address the challenges.