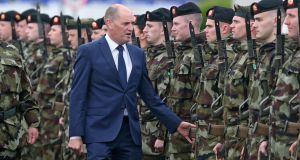 Minister of State with responsibility for Defence Paul Kehoe at Custume Barracks, Athlone, where he reviewed troops of the 60th Infantry Group ahead of their six-month deployment to the Golan Heights in the Middle East. Photograph: Colin Keegan, Collins Dublin

Fianna Fáil has said the Government must give “urgent consideration” to the establishment of a pay review body for the Defence Forces.

The party’s spokesman on defence Jack Chambers said on Monday that Fianna Fáil believed that a move by the representative organisation for enlisted personnel in the Defence Forces, PDforra, to affiliate with the Irish Congress of Trade Unions (Ictu) should be “explored”.

Mr Chambers said the issue of affiliation alone would “not address the current deep impasse on pay and conditions of the current Defence Forces”.

“The policy of inertia by the Government has led to the Defence Forces being at their lowest number yet in the history of the State and urgent consideration for the establishment of a pay review body must be progressed by Government to reflect the unique nature of the role played by the Defence Forces and to address the deep historical inequities with pay and allowances.”

The Irish Times reported on Saturday that the chief of staff of the Defence Forces had expressed concern in a letter to Government that permitting PDforra to link up with the trade union movement would have implications for State security.

Ictu is to consider the application by PDforra at a meeting on Wednesday.

The representative body for officers, Raco, has consistently called for the establishment of a review body to assess pay for those in the military.

The Minister of State at the Department of Defence Paul Kehoe said the issue of affiliation with the trade union movement was going through a process.

“I ordered a review of the Conciliation and Arbitration scheme 24, 26 months ago and part of the terms of reference was to look at the Ictu question that was put to me out of a military case.

“I asked the chair of the review to look at that. He made a recommendation that we would have some form of process with Ictu. My officials are going through that at this moment in time. I am waiting for the final outcome and the report on that and I will not comment on it until I get that from my own officials. I know this is an issue for representative association, particularly PDforra.”

Mr Kehoe on Monday reviewed the members of the 60th Infantry Group who will leave shortly for service with the United Nations Disengagement Observer Force on the Golan Heights.

Mr Kehoe said: “Participation in overseas peacekeeping missions across the public service, but most particularly by our Defence Forces, is a key element of Ireland’s foreign policy. It has been an important dimension in cementing Ireland’s international obligations as a committed member of the UN and the EU.”