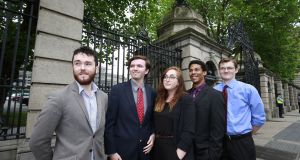 There is a well worn path to centres of political power abroad by Irish students intent on a career in politics whether as elected representatives or in the backroom where policy and politics collide.

Over the years hundreds have gone to see how major powers do politics, predominantly in Washington DC or Brussels, but also London, Paris, Ottowa and further afield.

But the traffic is not one way and the corridors of Leinster House throughout the year are filled with the sound of international accents as students from across the mainly English-speaking world step into the waters of Irish parliamentary politics to compare and contrast, and see democracy in action Irish-style.

“It’s been a very eye opening experience comparing how politics work in Ireland with how they work back in the States,” according to Darius Diamond (21) a f political science and history student at Brown University in Providence, Rhode Island.

“In the States it’s a little more political intrigue and super uptight, super secure whereas here it’s much more friendly.”

He came to Leinster House through an internship company Global Experiences on college programmes that can cost from US $6,000 to US $9,000 including student accommodation, orientation and weekend excursions to places like the Cliffs of Moher and Belfast.

Darius wanted to study abroad and is on an eight-week internship, following a previous internship with a law firm in Hawai’i and hoping for a future in law or foreign policy.

Apart from administrative work for Cavan Senator Joe O’Reilly he has done some research including on climate change and a proposed whiskey distillery in Bailieboro and has come up with some suggestions. The Rhode Island student notes that the Oireachtas sells its own label wine but reckons it should be selling its own label whiskey “because it’s a real Irish drink”.

Sydney Linholm (19) also came to Ireland through the Global Experience programme. A Toronto native now living in Ottowa, she is studying political science and majoring in North American politics at Carleton University.

She gets a college credit for her internship and will do a research paper comparing her time in Dublin with a placement with a Canadian Liberal Party MP Kyle Peterson.

Why Dublin? “They pretty much told me ‘you want to go into government, Dublin is the best place for you’.”

“In Canada the structure of the Government is very similar and the only real difference I would say is it’s a bit more relaxed here but it’s not too different in Canada. They’re not as intense as the US for sure but there’s still that element of cut-throatness that you don’t have here. “

For her the biggest benefit of doing the programme is not the college credit, but “that I can put it on my resume and it will look really good”.

The Houses of the Oireachtas do not offer an internship programme but facilitate a student placement programme, mainly for Irish students who are placed with TDs or Senators and undertake work experience over a semester which mirrors their course content. This year 74 students participated.

Many TDs and Senators are approached directly by Irish students or through international internship programmes.

Max Murphy (22) whose parents are Irish was brought up in the south of France in Mazeres near Toulouse. He did a two-week placement in secondary school with Fine Gael Senator Catherine Noone.

After doing a degree in international law in Université Toulouse Capitale “I decided to come over here and Senator Noone very graciously accepted to take me on”. He has been working with her for six months, doing office administration and “the daily tasks the Senator needs to be done. That can go from research to daily management, answering constituents’ emails.

“And because the Senator is running for Dublin Bay North in the next election I’ve been involved in helping out with the campaign,” helping write press releases, letters for the constituency and designing leaflets that could be on medical cards, travel or how to live a greener life.

“It’s been a great experience. I would want to get the best training and the best knowledge of Irish politics and be involved as much as I can and hopefully someday work in Leinster House on a permanent basis.”

He wil do a Masters in international relations and politics in UCD, on a part-time basis to allow him to keep working in Leinster House.

But why move from the South of France? “The academic side of study in France made me sick in the end,” he says describing France as having “one of the most violent ways of teaching - violent in that they really try to feed you like geese and see who’s able to stick it out because they have a system where everybody’s allowed to go to university and they have to get rid of a lot of people”.

In France more than 50 per cent of students fail and end up having to repeat their year or else leave. “It’s starting to change now with Macron,” says Max but when he started law there were 2,000 students, 60 per cent failed first year and only 400 graduated at the end of the final year.

“I did a year in Queen’s university Belfast and I saw the difference in the way they assessed you,” he says. In France “it was more teaching with verbal bashing rather than teaching with uplifting and encouragement”.

He has followed French politics very closely and because he is in Ireland a lot he would keep up with Irish politics and is very surprised at the lack of ideological conflict between the two largest parties.

“It’s not as easy to make an ideological difference between Fine Gael and Fianna Fail as between the Socialist Party and Republican Party in France.”

William Deblois (20) an Iowa State University student of political science, history and statistics makes a similar point. “It’s very surprising to see how much people can still have differences when the two parties appear very similar from the outside.”

He came to Ireland through EUSA, an academic internship organisation that sets up placements in places like Dublin, Prague and parts of China and has been involved in doing constituency clinic work, dropping leaflets, writing press releases.

He too finds politics in Ireland “a lot less uptight” and a very different world to that in the States, pointing to meeting the Taoiseach at a Fine Gael staff party and having a chat with him, which would never happen in the US.

Looking potentially at a career in foreign policy or perhaps as a politician he is a registered Republican and has volunteered at the Iowa caucuses. But he is not a fan of US president Donald Trump.

“He’s not a true Republican. It’s a shame that as the Republican Party we’re equated with him.”

Glenham Smith, (20) a student of government, international politics and international security at George Mason University in Northern Virginia, is not a Trump fan either.

“I think he’s damaged ties to traditional allies the United States has. I think his way about policy hasn’t been effective and I think they could go about it a better way.”

A third year student at George Mason University in Northern Virginia, a lot of his focus is on European politics. After his eight weeks in Ireland he is planning to do a research paper on the Border and Brexit and the impasse.

He thinks there is not enough focus in the US on issues like Northern Ireland. “They have a lot of focus on Russian, China and the Middle East,” as pressing security issues.

“The Irish border issue is definitely a pressing issue and I think if it’s not a focus internationally things can get very awful for people.”

What has surprised him about Irish politics is how much attention is paid to local issues.

“One of the first things I worked on here was bus shelters on a specific street and that was very different to me versus how things are done in the US where there isn’t that close relationship between high officials in public office and their constituents.

“It just doesn’t really get that direct in the States.”