Defence Forces pay boost will not be extended across public service 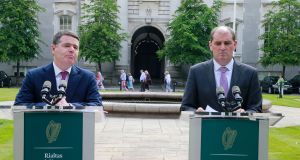 Minister for Finance Paschal Donohoe and Minister of State for Defence Paul Kehoe announced an increase in the military service allowance paid to virtually all members of the Defence Forces of 10 per cent. Photograph: Nick Bradshaw

Increases to allowances put in place to boost pay for Defence Forces personnel will not be extended to other groups of State employees, a development which could set the Government on a collision course with public service unions.

The Cabinet agreed yesterday to increase the military service allowance paid to virtually all members of the Defence Forces by 10 per cent and to reverse cuts of 10 per cent made to other payments in 2013. A number of other outstanding pay adjudications for some military personnel are also to be paid out.

The Government said the increase to the military service allowance, which ranges from about €40 to more than €120 per week, would boost pay for the majority of personnel by between €602 and €675 per annum.

The increased allowances are to be paid in addition to increases under the existing public service pay deal and are aimed at tackling serious staff retention issues in the Defence Forces identified by the Public Service Pay Commission in a report published yesterday.

Some 60 per cent of serving enlisted personnel and non-commissioned officers spoken to told the commission they intended to leave the Defence Forces in the next two years. The commission warned that essential services provided by the Air Corps were in jeopardy due to a shortage of pilots.

Minister of State at the Department of Defence Paul Kehoe said the measures would be worth 4.19 per cent to a three-star private solider with four years’ service. He said that if a person in the private sector was offered an increase of 4.19 per cent “they would take your hand off”.

However, Comdt Conor King, general secretary of the Representative Association of Commissioned Officers (Raco), said the proposals “are not going to cut it” and were “not going to be enough to stem the exodus” of personnel.

In real terms, he said, the increase in the allowance was worth “about 96 cent gross a day for a private solider, about €1.30 for an officer and about €1.70 for a non-commissioned officer”.

Gerard Guinan, of Defence Forces representative group PDForra, said some of the recommendations made by the commission fell “considerably short” of meeting its expectations.

The decision to reverse cuts that were made to payments under the Haddington Road public pay agreement in 2013 could pose a problem for the Government with other public service groups likely to seek to claw back austerity era cuts. Teachers have already signalled that they will demand that the Government reinstate allowances in the education area.

Kieran Christie, general secretary of the Association of Secondary Teachers, Ireland, said his union would “be redoubling its efforts to ensure that allowances for teachers will be restored”.

The Teachers’ Union of Ireland said pay equality for teachers was “mathematically impossible” without reinstatement of an allowance withdrawn for those who entered the profession after February 2012.

“This claim has been lodged in the appropriate forum, and the unions also wrote over a year ago to the Public Service Pay Commission about the vital importance of the allowance’s reinstatement in the context of the recruitment and retention crisis in the teaching profession,” it said.

Minister for Public Expenditure Paschal Donohoe ruled out extending similar pay improvements to those offered to military personnel to others in the public service. In a statement to The Irish Times, he said: “The current wage agreement is clear. Section 3 states that any recommendations from the pay commission will not give rise to further claims across other sectors. I expect this to be honoured.”

The Department of Defence confirmed it held preliminary talks with the Irish Congress of Trade Unions about military representative bodies affiliating with the trade union movement umbrella organisation. However, highly placed sources confirmed the Government would not permit military personnel to have the right to strike.