‘We will continue as long as there’s hope,’ pledges Supt Healy of Belmullet gardaí 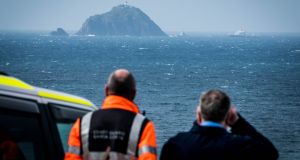 Hazardous conditions: search has been focused on a narrow channel off Blackrock island, 13km west of Blacksod, where the helicopter crashed on March 14th. Photograph: Keith Heneghan / Phocus

Almost three weeks after the Sikorsky S-92 helicopter crashed off the north Mayo island of Blackrock, the air, sea and search is to continue for Irish Coast Guard winch crew Paul Ormsby (53) and Ciaran Smith (38).

A further break in weather on Monday will suspend sub-sea efforts, but Irish Coast Guard operations manager Gerard O’Flynn and Supt Tony Healy of Belmullet gardaí intend to come up with a further plan for this coming week.

“The hope remains, we haven’t given up hope. We will continue to search for another period given that we have resources on scene and available,” Mr O’Flynn said.

After two long, arduous and often hazardous days at sea, with equinoctal weather conditions sweeping a water spout or mini tornado off Achill across Blacksod Bay, an inter-agency team and west Cork salvage tug Ocean Challenger hoisted a section of the aircraft from a depth of 40m.

“It was a significant amount of wreckage, and it was very important that we lifted it, not alone for the investigation but for the families...we were hoping there would be something underneath it, and we are desperately disappointed that there isn’t,”Air Accident Investigation Unit (AAIU) chief inspector Jurgen Whyte said.

A prayer service at the wreckage for all four air crew – Capt Dara Fitzpatrick (45), co-pilot Capt Mark Duffy (51) and winch team Paul Ormsby and Ciaran Smith – was said on the deck of the Irish Lights ship Granuaile, where the section of the fuselage was secured.

The rotor head, main gear box, one engine and “associated” pieces will be taken by sea on the Granuaile to an undisclosed location, and transported to Gormanston, Co Meath for further examination by the investigation team.

The sub-sea dimension to the search for the two missing aircrew was focused on a narrow channel off Blackrock island, 13km west of Blacksod, where the helicopter crashed in the early hours of March 14th.

Capt Fitzpatrick was recovered from the sea within several hours of the crash, and the body of Capt Duffy was retrieved by Naval Service divers from the cockpit last Sunday, March 26th. The flight data recorder was recovered by the divers two days before that, during the first short easing in sea conditions.

TheAAIU confirmed on Saturday that “no mechanical anomalies” with the aircraft had been detected in an initial analysis of data retrieved from its health and usage monitoring system (HUMS) and multi-purpose flight recorder.

Investigators, who must issue a preliminary report within 30 days of the crash, will now focus on operational elements, including navigational aids, procedures and human impact.

“It’s a long, arduous investigation which will take several months,” Mr Whyte said, speaking at a briefing at Blacksod pier on Sunday evening.

“We must talk to the different players involved. That takes time; takes time to gather facts, time to analyse and time to come to a conclusion,” he said.

The Irish Coast Guard, which has been co-ordinating the search for the two airmen with the Garda and AAIU, had engaged Bere Island company Atlantic Towage and Marine for the salvage, after an attempt to tilt the wreckage using an airbag early last week was hampered by sea conditions.

A four metre swell throughout Saturday had precluded safe diving to hitch strops on onto the section.

A brief respite allowed the divers to attach the strops early on Sunday morning, but by 3pm, the island had disappeared from view entirely as the seas around Duvillaun and the Inishkeas whipped up a cauldron of spume.

When tide slackened, the Ocean Challenger moved into position and the Irish Coast Guard Sligo-based Sikorsky S-92 Rescue 118 was tasked to monitor the lift from above.

Families of the missing men had been kept informed throughout the weekend on progress, and were the first to be told on shore that no bodies had been found.

The Marine Institute’s remotely operated vehicle (ROV) Holland 1 will be deployed for further scans of the seabed.

Expressing his disappointment on behalf of the team, Supt Healy promised that “where there’s hope of recovering our two missing crewmen, we will continue”.

RNLI all-weather lifeboats from Mayo’s Achill and Ballyglass and Donegal’s Arranmore island, along with Sligo and Bundoran crews, were at sea throughout the weekend, while mountain rescue teams from several counties assisted Irish Coast Guard units and Civil Defence in shoreline searches.

Back at the local community hall in the Gaeltacht community of Eachléim, north Dublin chef John Dowd was fighting back tears as read messages of sympathy and support, including cards made and letters written by school children, from all over the island.

“I used to see the S-92 helicopter pass over my house in Swords, so I just thought I’d get in the car with the trailer on Friday and travel up with food and gear,”he said.

As news filtered through that the men had not been found, one Erris resident summed up the heartbreak. “Is é an farraige – that’s the sea,” he said.