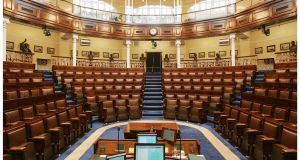 The Houses of the Oireachtas: Last May, a pest-control firm was called out following complaints of a “rancid smell” emanating from the floor outside the press office. Photograph: Alan Betson

Rats, mice, bluebottles and garden ants were among the pests and creepy-crawlies found at Leinster House in the past two years.

A pest-control company was called to the parliamentary complex 15 times to deal with the threat of infestations during 2015 and 2016 at a cost to the taxpayer of €8,354.

Inspection reports compiled by the company reveal problems with black garden ants in the creche at Leinster House, rats outside the press office, and an infestation of bluebottle flies in TDs’ offices.

Last May, the pest-control firm was called out to deal with reports of rats on the ground floor of the main building following complaints of a “rancid smell” emanating from the floor outside the press office.

A pest-control technician reported that there was a hole in flooring outside the ladies’ toilets, which exposed “old cast-iron waste pipes” and acted as an entry point for rodents.

Last October, the pest-control company was called in response to reports of a bluebottle infestation in three rooms in the LH2000 annex of Leinster House, where many TDs and Senators have their offices.

A pesticide spray treatment was carried out to address the infestation in the three offices located on the third floor of the building, as well as in the adjacent corridor.

“Sub-floor and suspended roof inspected but no sign of any dead rodent bodies or rodent droppings,” the inspection report notes.

The records, released under the Freedom of Information Act, show there have also been two callouts in 2017.

On January 31st, the company was summoned in response to a “smell of rodent” in the Kildare Street reception of Leinster House. However, no dead rodents were discovered on inspection.

On March 27th, the company was again called out in response to sightings of “rats in [the] main building on [the] ground floor”.

In their inspection report following the callout, the technician recommended that a “deep clean” of the canteen was required “as there is a lot of food debris, which is a food source for rodents and needs to be cleaned ASAP”.

A spokesperson for the Houses of the Oireachtas said: “We routinely check traps, baits and call in pest control as would happen in any other building of similar age in a city-centre location surrounded by construction and Luas works.”